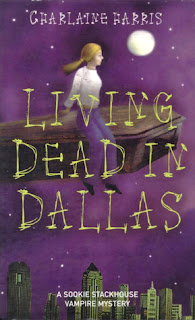 Sookie Stackhouse likes living in Bon Temps, Louisiana, and she likes working as a cocktail waitress at Merlotte's. But she is having a streak of bad luck. First her co-worker is killed, and no one seems to care. Then she comes face-to-face with a beastly creature which gives her a painful and poisonous lashing. Enter the vampires, who graciously suck the poison from her veins (like they didn't enjoy it).

The point is: the vampires saved her life. So when one of her bloodsuckers asks for a favour, she obliges-and soon Sookie's in Dallas, using her telepathic skills to search for a missing vampire. She's supposed to interview certain humans involved, but she makes one condition: the vampires must promise to behave, and let the humans go unharmed. But that's easier than done, and all it takes is one delicious blonde and one small mistake for things to turn deadly...

I had finished Dead Until Dark earlier and the week, and I wanted to continue with the series.  I had liked Dead Until Dark, but it wasn't a "blow me away read."  I was hoping for something a bit more with Living Dead in Dallas.  From the beginning, I knew I'd enjoy this one better.

Because of Sookie's relationship with the vampire Bill, she's intrinsically connected to the much bigger vampire community.  Because of this, when Eric, the big head honcho vampire summons her and Bill she must go whether or not she wants to.  After a harrowing trip to see him, where Sookie is attacked by an evil, scary creature in the woods, her obligations to Eric are even greater.  Soon she finds herself on a plane to Dallas to help one of the big vampires there find his missing brother.

In Living Dead in Dallas, I thought the plot line was a lot stronger, and moved at a much better pace.  I also thought that Sookie was much more like-able.  Something about her had rubbed me the wrong way in Dead Until Dark, but I didn't get that same feeling this time around.  She seemed to have come out of her shell more, and was much more accepting of her role in the vampire society.  I also really liked seeing the different ways in which the vampire communities acted and interacted, especially the vampires in Dallas.

I'm really looking forward to continuing this series as the year progresses.  I had hoped to read at least 4 books in the series by the end of the year, but I might just find myself reading up to the most current release this year.  We'll just have to wait and see!