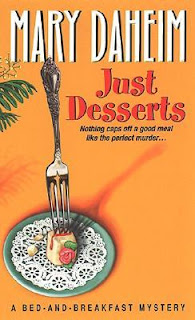 When the garishly grotesque clan of wealthy carpet-sweeper magnate Otto Broadie sweeps down upon Judith McMonigle's Hillside Manor Inn, it looks like there'll be a wild night of drinking, dining, and fortune-telling in the offing. But when their soothsayer-for-hire Madame Gushenka drops dead after someone douses her tea leaves with bug killer, harried hostess Judith and her irrepressible cousin Renie are left to clean up the mess. One of the Brodie bunch would dearly love to sweep the Madame's murder under the rug, however, and that might mean eliminating the nosy Ms. McMonigle as well. But with the help of her one-time beau, policeman Joe Flynn, Judith is determined to rattle the dust off some closeted family skeletons, in order to coax a killer out of hiding before coffee is served.

Just Desserts has been sitting on my shelf for a long, long time.  I thought this year would be a perfect time to brush it off and give it a spin.  Sadly, it wasn't one of my favorite books, and I probably won't be continuing with the series.

I liked the mystery of this book, and I try as I might, I still couldn't figure out who the killer was.  However, I couldn't connect with any of the characters.  I'm not sure if it was because they were more one dimensional, or if it was just that I didn't like any of the them.  For whatever reason, I didn't really find myself rooting any of them on.  I thought the main character, Judith, was flighty one minute and then snarky the next.  I just couldn't figure her out.  The introduction of her old flame, Joe Flynn was good, but there was something odd there too that made it hard for me to like him.

The writing in Just Desserts was decent, and like I said above, I thought the mystery was well thought out, but there were a lot of characters to keep seperate, and sometimes that made it confusing.  In fact, I found myself flipping back to the beginning a few times, trying to figure out who someone was talking about because I had them confused with someone else.  That doesn't always make a book as enjoyable as it could be!

All in all, this was a horrible book, it just wasn't my kind of book.  I'm still looking forward to trying out more in the cozy mystery genre and seeing if I can find some I really enjoy.
Posted by Sunnysmileqt at 1:49 AM