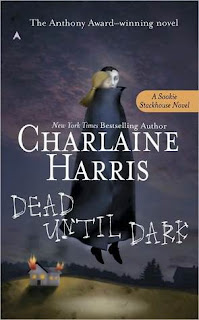 Sookie Stackhouse is a small-time cocktail waitress in small-town Louisiana. She's quiet, keeps to herself, and doesn't get out much. Not because she's not pretty. She is. It's just that, well, Sookie has this sort of "disability." She can read minds. And that doesn't make her too dateable. And then along comes Bill. He's tall, dark, handsome - and Sookie can't 'hear' a word he's thinking. He's exactly the kind of guy she's been waiting for all her life.

But Bill has a disability of his own: He's a vampire. Worse than that, hangs with a seriously creepy crowd, with a reputation for trouble - of the murderous kind.

And when one of Sookie's colleagues is killed, she begins to fear she'll be next ...

It's been years since I originally read this book.  I can remember reading it, thinking it was pretty good, and then going no further in the series.  I thought the 2013 Sook Stackhouse Challenge would be a good way to motivate myself to go back to this series.

Dead Until Dark is a pretty quick read.  I read it in one day, and found that it was good, but not too thought provoking which is what I needed after finishing Winter Garden.  Dead Until Dark introduces us to Sookie Stackhouse, a small town waitress with a secret.  She can hear people's thoughts.  She's like Edward Cullen but female, and not a vampire.  However, it isn't until she meets her first vampire, Bill, that she realizes that she can't read vampires thoughts.

I liked seeing the relationship between Bill and Sookie grow and develope and I'm curious to see where Harris takes the whole relationship.  I think the mystery of the "murderer" really played second fiddle to this relationship, and the book, for me was much more of an introduction to the vampire life and how this whole change for Sookie would start to play out.  Because of that, I rated the book a little lower because I wanted a bit more mystery and a little less angst, if you know what I mean.

I don't watch True Blood so I can't really compare the two.  I watched the first few episodes a few years back, but it gave me really vivid nightmares about vampires and I'm not really interested in a repeat performance.  Plus, being pregnant always enhances my dreams and fears so I certainly can't watch it now.  That's why I have an entire season of The Walking Dead hanging out on my DVR.  Even the commericals instill a panic and fear in me that normally isn't there...oh hormones how sometimes I loath thee.

Anyways, I'm going to give Living Dead in Dallas a try this coming week, and I'm curious to see if I enjoy it more than I did Dead Until Dark.