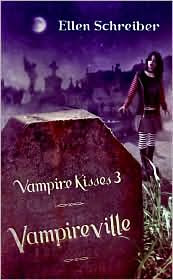 For goth-girl Raven, dating her dream boyfriend is complicated, especially because Alexander's secret means they can only meet at night. And now they must be extra wary, with Alexander's arch rival, Jagger, creeping around town. Then Jagger's exquisitely pale sister Luna also surfaces—and seems to have her sights on Raven's own longtime nemesis.

Raven and Alexander must begin a terrifying hunt for Jagger and Luna's secret hideout. Can they drive them away before Dullsville is eternally threatened by these menaces from the Underworld?

This is the third book in the Vampire Kisses series, and I didn't like this one nearly as well as the first two. I don't know if the thrill of reading a new vampire series is wearing off or I'm just burning out too quickly on this series.

In this installment of the series, Alexander and Raven set out to rescue Trevor, Raven's longtime foe, from a life of Vampirehood. Throughout the way, there are several strange encounters with vampire twins, Luna and Jagger. Alexander and Raven go all over town, searching for the twins coffins in which they sleep during daylight hours. Once found, they hope to hide them, forcing the twins back to Romania. To me, that whole situation was straight out of an old black and white vampire flick and it really started to annoy me.

Also, the writing in this series is not stellar - you can definitely tell it is directed to a younger crowd. However, during the first two books, this did not bother me. In this one, I found myself picking apart sentence structure and everything else. I do believe, a lot of the issues, were bad timing on my part. Things have been stressful at work, and there's been a few situations at home lately that DH and I have had to handle (stupid stupid water company...grrr) that most likely affected me as I was reading last night.

I started the four book in the series this morning and hope to finish it and number five this week.

Posted by Sunnysmileqt at 11:44 AM

I just finished this today and agree it is definitely geared towards a younger audience. I don't think I'm going to read book 4 and beyond.