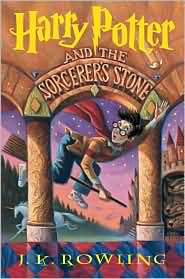 Orphaned as a baby, Harry Potter has spent 11 awful years living with his mean aunt, uncle, and cousin Dudley. But everything changes for Harry when an owl delivers a mysterious letter inviting him to attend a school for wizards. At this special school, Harry finds friends, aerial sports, and magic in everything from classes to meals, as well as a great destiny that's been waiting for him...if Harry can survive the encounter. From an author who has been compared to C. S. Lewis and Roald Dahl, this enchanting, funny debut novel won England's National Book Award and the prestigious Smarties Prize (Barnes and Noble).

Finally, almost 12 years after its original publication I can say I've read the first Harry Potter book. I've owned this book for almost five years, occasionally moving it from one shelf to another and saying every year "This is the year I will read Harry Potter." And finally, the time has arrived. And...I was an imbecile to have waited as long as I did.

My goal is to finish the series before the 6th movie releases in July - I have seen and own the first five movies, which I adore but the books are so much richer. I'm going to try to get my husband to read them and then we'll have a movie marathon (*nerd alert* hehehe).

So anyways, I loved, loved, loved this book. Harry tugs at your heart strings from page one. His aunt, uncle and cousin are the most obnoxious, irritating people I have EVER met and I really wish Hagrid had turned them all into pigs. The best part of the whole book was the fact that it had been ages since I have seen the movie so I had forgotten quite a number of things that happened including the bad guy. I'm really looking forward to books six and seven because I'll really have no clue what will happen.

I still have three other books I'm reading too, but I will definitely be starting The Chamber of Secrets soon!

Posted by Sunnysmileqt at 12:39 AM

I LOVE these books. It took me a long time to finally read the first book too. But I love them! I love the movies too and am SO EXCITED for the new one in July! I'm planning to re-read all the books before that. When I was sick last week I watched three of the movies! I'm a total Harry nerd. I think you'll love the rest of the books!! :)

this is on my list to read this year, so glad I am not the only one just now getting to these books, lol