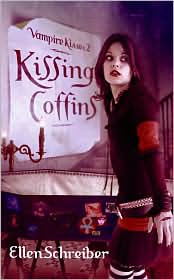 Not far from Dullsville someone's lurking in the dark...

After meeting the handsome and shadowy Alexander Sterling, goth-girl Raven's dark world has a bright, new glow. But as in her favorite moving, Kissing Coffins, Raven knows that love always has its complications, especially when Alexander has a big secret to guard.

When Alexander suddenly disappears, Raven leaves Dullsville to begin a dangerous search to find him. Can she stay safe, no matter who - or what - she encounters on the way (Cover Blurb)?

The second book in the Vampire Kisses series, Kissing Coffins is even better than the first one. Alexander has suddenly disappeared and Raven sets out by herself to find him. Going to visit her hippie aunt, she enters The Coffin Club and discovers the super creepy and scary vampire boy Jagger. Jagger is also looking for Alexander, but his motives are much darker than Raven's.

All in all, this book of the series, was definitely darker than the first one, and had more action. However, it still had all the same aspects that made me like this series in the first place. One of my favorite parts of this series is how it is so full of vampire cliches, including when Alexander is almost killed from accidentally inhaling some garlic powder.

My favorite part of the whole book is when Alexander is telling Raven about Jagger and states, "My parents were bohemians and we really never fit in with our kind. We were what was known as vampire vegetarians." I immediately thought of my boyfriend Edward Cullen...hehehe. But anyways, enough about that. I'm off to start the next book Vampireville and then to bed for a good night's sleep!

Posted by Sunnysmileqt at 1:05 AM

I hope I am able to get to this series.