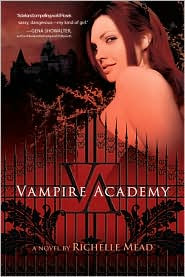 Title: Vampire Academy
Author: Richelle Mead
Pages: 336
Rating: 4/5
St. Vladimir's Academy isn't just any boarding school—it's a hidden place where vampires are educated in the ways of magic and half-human teens train to protect them. Rose Hathaway is a Dhampir, a bodyguard for her best friend Lissa, a Moroi Vampire Princess. They've been on the run, but now they're being dragged back to St. Vladimir's—the very place where they're most in danger. . . .
Rose and Lissa become enmeshed in forbidden romance, the Academy's ruthless social scene, and unspeakable nighttime rituals. But they must be careful lest the Strigoi—the world's fiercest and most dangerous vampires—make Lissa one of them forever (Barnes and Noble.com).
I finished this book early last week but never had a chance to write up the review. I really enjoyed this book and thought it was a good start to a series. I've started the second book in the series but accidentally left it in my desk drawer at work over the weekend so I had to read something else.
I think my favorite part of this novel, was the history within it. The novel focuses a lot on St Vladimir and his shadow kissed friend Anna. St. Vladimir was a healer, and used his powers to heal plants, animals, and other people. However, these healings left him a little crazy, and Anna was always there to help him out. Rose uses this information to solve the mystery of her and Lissa's relationship --- and to also figure out who the bad guy is. It's all very surprising and suspenseful - especially the last 50 or 60 pages.
Rose is my favorite of the series so far. She's bad ass, she's tough, and she doesn't let a lot of things bother her. And her "relationship" with her trainer Dimitri is hot --- I wouldn't mind letting him push me around a few times either...lol. I look forward to reading about how this relationship transpires.
I originally picked up this novel because of my obsession with the Twilight Saga and all things Twilight. I was looking for other novels to fill the void left by the absence of completing those books. While Vampire Academy is completely different from Twilight, I still really liked it and will be keeping me eyes out for other things by this author.

Posted by Sunnysmileqt at 12:25 PM

I just finished lastnight, and I have to say your review is dead on.