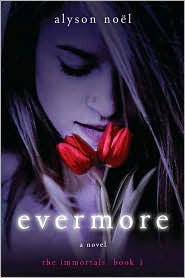 Title: Evermore
Author: Alyson Noel
Pages: 306
Rating: 3.5/5
Since a horrible accident claimed the lives of her family, sixteen-year-old Ever can see auras, hear people’s thoughts, and know a person’s life story by touch. Going out of her way to shield herself from human contact to suppress her abilities has branded her as a freak at her new high school—but everything changes when she meets Damen Auguste…
Ever sees Damen and feels an instant recognition. He is gorgeous, exotic and wealthy, and he holds many secrets. Damen is able to make things appear and disappear, he always seems to know what she’s thinking—and he’s the only one who can silence the noise and the random energy in her head. She doesn’t know who he really is—or what he is. The only thing she knows to be true is that she's falling deeply and helplessly in love with him.
This was my last read for February. I finished it up this morning (when I was supposed to be up early to clean) and the ending was quite good. It's the stuff leading up to the ending I'm not sure I liked. This book started off really strong, and I couldn't put it down for about the first 100 pages. Then it started to slow. Slow to the point that I read two other books before picking it back up. Once I got through the middle, the end was full of twists and turns that were great.

This is the start of a brand new series called The Immortals. The next book Blue Moon comes out August of this year. I will probably pick it up, but I don't think it'll be the day it comes out.

I had high hopes for this book. When I first started it, it almost gave me the feeling I had the first time I read Twilight. I was ready to post big signs that said "TWILIGHT FANS UNITE - THIS BOOK ROCKS." Yeah that didn't happen. The main character Ever (that is such a weird name) was really whiney and annoying and so SELFISH. It got really old. She did however, redeem herself at the end though so that made it better.

I'm not telling you to not read this book. Go ahead and give it a try. It may have just been me and my mindset while reading it. I just wasn't as blow away by it as I was hoping.

Posted by Sunnysmileqt at 12:33 PM

I hate books that drag. It's always so tempting not to finish. Hope it isn't too bad since I just picked this up at Border's last weekend. I'm always looking for Twilight-ish books. Have you tried reading Cassandra Clare's Mortal Instruments series? It's pretty good.

I hope you love this book. I still think it was more me than the book anyways. I haven't read Cassandra Clare, but I'm going to take a look and see what they're all about. Thanks for the rec!

I have this one on my self...I'm thrilled about the first 100 pages, but after that...I pray it doesn't drag for me. I'm ADD and will lose interest fast. :(

I've had that happen - found a book I soooooo wanted to love and it flubbed. *sigh* Guess they can't all be great, eh?

I kind of agree with you on this one. I felt like the last part was pretty good, but up until then, I wasn't too sure about it. I just reviewed it before I read your review, but I think we had a lot of the same feelings! I'm hoping the next book will be good! :)