I got to meet Lauren Myracle...Fan Girl Squeal!!!

Back on Monday, I was scanning the library's website, looking to see if there was anything new around when I saw this: 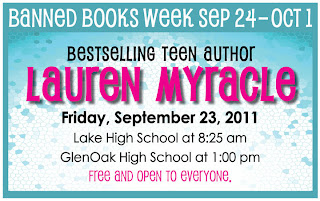 I almost fan girl screamed in my seat at work.  Lauren Myracle was going to be in my town!!  I was so excited I could hardly contain myself as a filled out my time off request.  Here's the thing...not many authors come to my town.  In fact, since I've been blogging, there haven't been any YA authors that have come to my town.  It's very sad.  So I was thrilled to see that Lauren was coming...and to kick off Banned Books week to boot!!  Lauren has had 7 of her 13 books challenged or banned and her TTYL series made the list of Top Ten Banned Books in 2009.

Needless to say, Lauren was absolutely amazing today.  She shared with us a number of emails that she has received regarding the subject matter of her books and how they want to remove them from library shelves everywhere.  She talked about how it made her feel as an author, and why she wrote the things that she wrote.  Why she said the things that she did.    I sat in the crowd, eagerly nodding my head at each point, growing frustrated at the close mindedness of some of the parents that were contacting her.  It was the perfect way to kick off Banned Books Week.

Lauren also showed us the trailer for her latest release Shine, and read a few passages for us.  I haven't had a chance to read Shine yet, but will be doing so in the next week, as it is already causing ripples throughout the young adult community for its content and subject matter.  Afterwards, she signed copies of Shine and I bought two:  One for myself and ONE FOR ONE LUCKY READER (I'll be posting more details in a seperate give away post).

So all in all, it was an awesome start to Banned Books Week!!

Posted by Sunnysmileqt at 3:18 PM