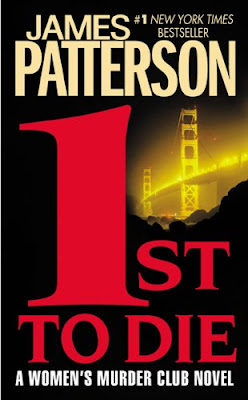 Imagine a killer who thinks, "What is the worst thing anyone has ever done?"--and then goes far beyond it. Now imagine four women --a police detective, an assistant DA, a reporter, and a medical examiner --who join forces as they sidestep their bosses to track down criminals. Known as the Women's Murder Club, they are pursuing a murderer whose twisted imagination has stunned an entire city. Their chief suspect is a socially prominent writer, but the men in charge won't touch him. On the trail of the most terrifying and unexpected killer ever, they discover a shocking surprise that turns everything about the case upside down (goodreads.com).

1st to Die was my first Patterson audio, and I have to say that it absolutely freaked me out!!  I completely forgot how violent Patterson's novels can be, and 1st to Die was no exception.  I was on the edge of my seat waiting to see what happened.  There were a few times I had to shut off my MP3 player and give myself a break.  It was that intense.  I'll definitely be checking out more of his books on audio because I think they bring a whole new feeling to his books.

However, the story itself seemed to be a bit lacking.  This was the first in the Women's Murder Club series.  Before this time, all the books I've read of Patterson's were from the Alex Cross series.  I'm actually looking forward to going back and re-reading these in order because I know I've missed some.  But anyways, back to the book at hand.  1st to Die introduces us to Lindsay Boxer, a tough, hard as nails detective, who is trying to solve a serial murder case involving newlyweds.  As the case moves along, Lindsay finds herself problem solving with her three friends: Cindy, Jill and Claire.  Hence, the women's murder club is born.

I loved the girls in the murder club, it was just the whole "mystery" aspect of the book that I found to be a bit absurd.  First off, I had the killer figured out by the time the book was half way over.  It kind of took a lot of wind out of the books sails, but I stuck on to figure out how Lindsay discovered everything.  Secondly, the epilogue threw me for a complete loop and left me feeling a bit sad and upset...not the type of feeling I like to have when finishing a book.

So, basically, I loved the audio aspect, didn't really like the book itself.  I'm going to try 2nd Chance and see if I like that one any better.  I'll let you know :)