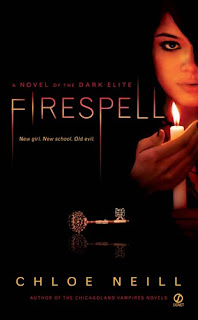 Lily's parents have sent her to a fancy boarding school in Chicago filled with the ultra-rich. If that wasn't bad enough, she's hearing and seeing bizarre things on St. Sophie's creepy campus. Her roommate, Scout, keeps her sane, but keeps disappearing at night. When one day Lily finds Scout running from real-life monsters, she learns the hard way that Scout is involved in a splinter group of rebel teens.

They protect Chicago from demons, vamps, and dark magic users. It's too bad Lily doesn't have powers of her own to help. At least, none that she's discovered yet...(goodreads.com)

This was a cute, quick read that I enjoyed.  It wasn't ground breaking, but it did keep me interested and turning the pages.

I found Lily to be a bit annoying at first.  I thought it was almost like the "poor Lily" show, and found the book to remind me of almost every other story I've ever read about a girl that has to go to a boarding school.  Things got to be a bit better once Lily followed Scout into the basement.  From there, the story really picked up the past and had me turning the pages faster and faster.

I loved the idea of magicians and dark magic users.  The entire concept was pretty interesting, and I thought the two sides were pretty well developed.  I'm curious to see what happens with Lily and the dark side and how Neill will handle that relationship.

I'm looking forward to reading the next book in this series, Hexbound, but I won't be breaking down any doors to get to it.