Banned Book Review: Audio of Are You There God, It's Me Margaret 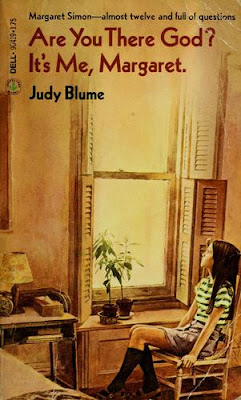 "Are you there God? It's me, Margaret. I can't wait until two o'clock God. That's when our dance starts. Do you think I'll get Philip Leroy for a partner? It's not so much that I like him as a person God, but as a boy he's very handsome. And I'd love to dance with him... just once or twice. Thank you God."

A move from the city to the suburbs, sixth grade in a different school, a new group of friends. But Margaret handles it...in her own funny, endearing way (judyblume.com).

Growing up, I read...A LOT.  I went to the library every Tuesday and took out stacks and stacks of books.  I started with Ramona, moved on to The Baby-Sitters Club, and finally landed at Judy Blume.  And I fell in love.  I couldn't read these books fast enough.  I sailed through Just as Long as We're Together, Blubber, and Starring Sally J Freeman as Herself; but none touched me as much as Are You There God, It's Me Margaret.  I read this book over and over and over again, wearing at the library's dog eared and much loved copy.  It was my go to read through later elementary and middle school.  Imagine my shock, as when I was researching banned books that I saw it's name high on the list.  And why was it banned?  What was so wrong with Judy Blume?

Are You There God? It's Me Margaret has been criticized by certain groups for being controversial in dealing with puberty and religious indecision. According to Blume, a woman called her in the early 1980s, and after confirming she was the writer of the book, called her a Communist, and hung up the phone. To this day, no connection between communism and the topics in the book has ever been made, but it was the start of her unfortunate battle with censors.

Having listened to this again, I still see no reason why every girl shouldn't have to read this book.  It's a coming of age story.  What girl doesn't agonize over her first period, her first boy girl party, and buying that first bra.  To me Judy Blume's books are a comfort, like a warm blanket on a rainy day!  I absolutely adored listening to this book again!  I cracked up laughing at work, getting odd stares from my co-workers, as I imagined the PTS's practicing their bust enhancing exercises..."I MUST...I MUST...I MUST INCREASE MY BUST."  I felt like I was 10 years old again, making the discovery of Judy Blume all over again.

Blume currently has five titles on the ALA list of most frequently banned books:  Forever, Blubber, Are You There God, It's Me Margaret, Deenie, and Tiger Eyes.  You can see Judy Talking about her books and censorship here:

Posted by Sunnysmileqt at 1:20 AM