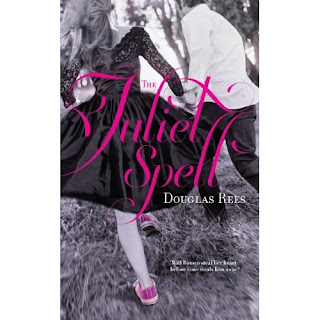 I wanted the role of Juliet more than anything. I studied hard. I gave a great reading for it—even with Bobby checking me out the whole time. I deserved the part.

I didn't get it. So I decided to level the playing field, though I actually might have leveled the whole play. You see, since there aren't any Success in Getting to Be Juliet in Your High School Play spells, I thought I'd cast the next best—a Fame spell. Good idea, right?

Good thing he's sweet and enthusiastic about helping me with the play...and—ahem—maybe a little bit hot. But he's from the past. Way past. Cars amaze him—cars! And cell phones? Ugh.

Still, there's something about him that's making my eyes go star-crossed....(goodreads.com)

I was thrilled to receive The Juliet Spell through Net Galley, as it was a title that I had wanted to read for quite a while. I like the Harlequin Teen line of books, and enjoy a wide variety of there titles. The Juliet Spell was no expection.

Miri is a girl with a dream. She is hoping beyond hope to be cast as Juliet in the community performance of Romeo and Juliet by the great William Shakespeare. She puts her wishes into a spell, and magically Edmund Shakeshaft appears in the middle of her kitchen. Edmund is the brother of Shakespeare, and my favorite character in the book. He's quitty, and charming, and pretty much had my heart as quickly as he captures Miri's. I loved how his character was protrayed. He was scared and quizzical, and some of his scenes had me laughing out loud, especially the first time he ever drove in a car. That being said, there were also times when I was so angry and disappointed in Edmund's decisions that I wanted to shake him. But I thought that this love hate relationship made the book that much more real.

I also enjoyed Miri's characters. I did find her to be a bit dense at times, and I wanted to shout through the pages everything that she was missing. But she had a charm about her that made her too likeable to stay annoyed with her. Her love for Edmund was young and fresh, and took me back to that first "real love" I experienced.

There were things about the book that bothered me, but I don't think they took away from the reading. I thought it was awfully strange how everyone, especially Miri's mother, just accepted that Edmund had come from the past and was now residing in her guestroom. I'm pretty sure if that was my mother, she would have riden me the riot act and then kicked Edmund to the curb. I don't think she would have dressed and fed him and helped him to find a new identity.

All in all, I thought The Juliet Spell was a cute, quick read that I would recommend to anyone who enjoys reading YA lit.

Posted by Sunnysmileqt at 2:43 AM

Good review Emily! I had a lot of problems with this one as well - but overall it was a quick and cute read. -emme