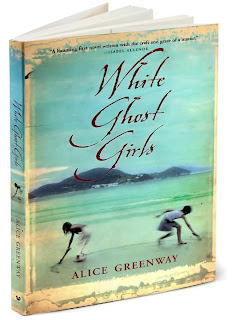 Summer 1967. The turmoil of Mao's Cultural Revolution is spilling over into Hong Kong as war rages in nearby Vietnam. White Ghost Girls is the story of Frankie and Kate, two American sisters living in a foreign land in a chaotic time. With their war-photographer father off in Vietnam, Marianne, their beautiful but remote mother, keeps the family in Hong Kong, frightened of losing her husband to a mistress or to the addiction of war itself." "Although bound together by living overseas, the sisters could not be more different - Frankie pulses with rebellion and risk, while Kate's the watchful one, all eyes and ears. Marianne spends her days painting watercolors of the lush surroundings, leaving the girls largely unsupervised, while their Chinese amah, Ah Bing, does her best to look after them. One day in a market, the girls decide to run off - with tragic results." "Immersed in the heat and color of late-1960s Hong Kong, a city shimmering between sea and sky, it is a world of fishermen, junks, and unexplained bodies floating up in the sea of plotting rebels, temple gods, and ghosts." In this novel, the girls tumble into their teenage years against an extraordinary backdrop both sensuous and dangerous. This tale of sacrifice and solidarity gleams with the kind of intense, complicated love that exists only between sisters (Goodreads.com).

What a hauntingly beautiful novel. I'm really at a loss of words over what to even say about this one. I can say though that I wish I hadn't waited so long to read it.

White Ghost Girls tells the story of two sisters, Kate and Frankie as they grow up in Hong Kong in the mist of the Vietnam War and Cultural Revolution. Raised mainly by their Chinese Amah, Kate and Frankie are full of mischief and secrets, which eventually comes back to haunt them. This novel takes tough topics: war, sibling rivalry, even death and and delicately weaves a story that is truly stunning. When reading this I felt as though I was in Hong Kong, deep in the jungles feeling the heat and the mist off the water.

This novel reads quickly and once started is hard to put down. I was only about 40 pages into it when I sat down tonight and finished up in a few hours. However, despite its short length, White Ghost Girls will stick with you long after you finish. I am still amazed that this was Greenway's debut novel.

Posted by Sunnysmileqt at 4:03 AM

I just bought this book and I love your review! Now I want to pull it ot he top of the TBR!