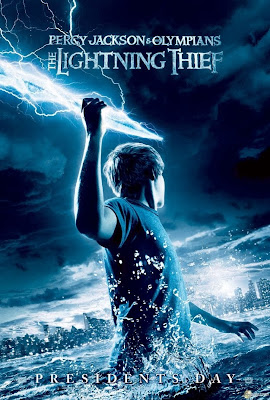 It's the 21st century, but the gods of Mount Olympus and assorted monsters have walked out of the pages of high school student Percy Jackson's Greek mythology texts and into his life. And they're not happy: Zeus' lightning bolt has been stolen, and Percy is the prime suspect. Even more troubling is the sudden disappearance of Percy's mother. As Percy finds himself caught between angry and battling gods, he and his friends embark on a cross-country adventure to catch the true lightning thief, save Percy's mom, and unravel a mystery more powerful than the gods themselves.

I went to see the new Percy Jackson movie today. I've been wanting to go for a while now, but no one wanted to go with me, so I just went by myself today. One would think that would be weird, but it was actually quite enjoyable. No one tried to eat my popcorn, or complained when I mixed it with my raisinets, and no one hogged the arm rests!!

I'm going to talk about the movie in two ways. The initial thoughts I had while viewing the movie and then my overall impression of the movie as a whole. There probably will be a few spoilers so be aware if you haven't read the book, or still want to see the movie.

So, my overall impressions. If I had never read the book, I absolutely one hundred percent, would have adored this movie. It had monsters, gods, and action - plus really awesome special effects. However, due to the fact that I had read the book, fell in love with the book, and can't get enough of this series, I really did not like the movie. The overall storyline of the movie was the same. Someone had stolen Zeus' lightning bolt and Percy was sent to recover it and stop the war between the gods, but that is really where the similarities ended. They changed so much of the central storyline, and left so much out, I feel that they really ruined the story.

I understand that movies cannot include everything that is in the book, but the flow of the book was so good and so well written, I have a hard time understanding why the movie writers felt the need to change so much of the initial story. I thought one of the most flawed scenes in the movie, was the trip to the underworld. It lacked all the build up and fear that was portrayed in the original book.

On my way out of the theater, there was a father speaking with his young son about how the movie was ok, but the book was a lot better. I spoke to him for a few moments about his feelings, and much of his thoughts on the movie were the same as mine. It was just too different from the book to satisfy fans of the series.

So all in all, I'm glad I went to go see it, but its definitely not one I'll be rushing out to buy on DVD. And I'd advise against taking really young children to see this movie. The monsters can be quite intense, and I saw two parents take crying kids out of the theater.

Posted by Sunnysmileqt at 8:54 PM

interesting - I've been wanting to go as soon as I find time. Loved the book. Thanks to your review, I'm now better prepared