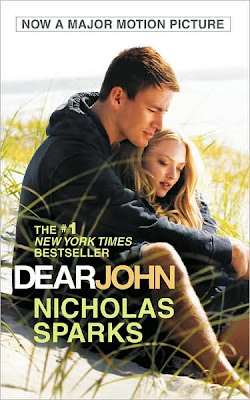 An angry rebel, John dropped out of school and enlisted in the Army, not knowing what else to do with his life--until he meets the girl of his dreams, Savannah. Their mutual attraction quickly grows into the kind of love that leaves Savannah waiting for John to finish his tour of duty, and John wanting to settle down with the woman who has captured his heart. But 9/11 changes everything. John feels it is his duty to re-enlist. And sadly, the long separation finds Savannah falling in love with someone else. "Dear John," the letter read...and with those two words, a heart was broken and two lives were changed forever. Returning home, John must come to grips with the fact that Savannah, now married, is still his true love—and face the hardest decision of his life (http://www.bn.com/).

I read this book in anticipation of seeing the movie this past weekend. Well, I was too sick to see the movie but I'm still really glad I read the book.


I've always been a big fan of Nicholas Sparks, and fell in love with The Notebook, long before it became a movie. I've read it about five times, and seen the movie too many times to count. I'm rarely disappointed in one of his novels, and Dear John was no exception. Yes, it was predictable, and I had it pretty much figured out soon after starting the story; but I still fell in love with the characters and couldn't get through the story fast enough.

Sparks tells such a strong love story, and I often wonder if he's this loving in real life. Does he treat his wife like his characters treat the women in his books? Does he love with that much passion? I've always been curious about that. While John and Savannah's story did not touch me in the way Noah and Allies story did in The Notebook, it still left me breathless with a few tears here and there.

This is definitely one you would want to pick up for the quiet Sunday afternoon when you just want to get lost in someone's story!

Posted by Sunnysmileqt at 10:54 PM

I've left this alone, simply because I'd be concerned with the let down. How could anyone top The Notebook?
thanks for the review. (followed your link from Home Girls's Blog. I'm doing the same challenge)