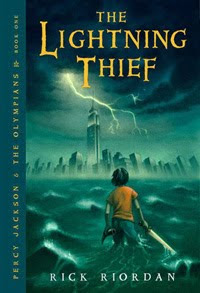 Percy Jackson is about to be kicked out of boarding school...again. And that's the least of his troubles. Lately, mythological monsters and the gods of Mount Olympus seem to be walking straight out of the pages of Percy's Greek mythology textbook and into his life. And worse, he's angered a few of them. Zeus's master lightning bolt has been stolen, and Percy is the prime suspect.

Now Percy and his friends have just ten days to find and return Zeus's stolen property and bring peace to a warring Mount Olympus. But to succeed on his quest, Percy will have to do more than catch the true thief: he must come to terms with the father who abandoned him; solve the riddle of the Oracle, which warns him of betrayal by a friend; and unravel a treachery more powerful than the gods themselves (Cover Blurb).

I had never heard of this book until I saw an advertisement for the movie when I went to go see Harry Potter and the Half Blood Prince. Right away I knew it was a movie I wanted to see; however, I definitely wanted to read the book first. I had seen the Harry Potter movies first without reading the books, and missed out on so much and I didn't want that to happen again. I am so glad I decided to give this book a shot. I really enjoyed it, and cannot wait to read the next four books.

Percy Jackson is kind of a lost soul. He's always in trouble, moving from one boarding school to the next, and doesn't have many friends. He's about ready to be kicked out of Yancy Academy, where he has befriended both the Latin teacher, and his new best friend Grover. However, on a school field trip, Percy is attacked by a monster of sorts, and his entire life changes.

The Lightning Thief provides one adventure after another, with lots of action that keeps the story moving forward at a rapid pace. Once I started, I had a really hard time putting this down and found myself sneaking in a few pages here and there when no one was looking at work. If it wasn't for the Olympics distracting me and taking away from my reading time at night, I probably would have finished this book in close to one sitting.

I have seen a lot of comparisons between the Percy Jackson books and the Harry Potter series, but I feel that these books each have their own feel. Yes, their are some similarities. Both boys go to a special school, have parents with different types of "powers" and have two good friends - the smart girl, and the geeky side kick. But I feel that it is there that the similarities stop. Riordan's style is much different from that of Rowling, with more action sequences that come much faster and never seem to stop. Not only that, the amount of Greek mythology that surfaces in this story is amazing, and Riordan really did his homework.

I am so glad that I decided to give this book a shot, and will definitely be continuing on with the series. I hope to see the movie here in the next few weeks and look forward to letting you know what I think of it. Until then, here is the trailer:

Posted by Sunnysmileqt at 3:24 PM

Hi Emily, thanks for stopping by my blog :o) Great review - this is a fab book & I can't wait to read the rest of the series! I've added your link to my review :o)

I'm really excited to see this and to read this book. It's actually secretly in my reading pile, but I don't want to read it until after I see the movie. Your review was great though and I'm not sure I'll be able to wait! Thanks!

Thanks for the review! I can't wait for it get to me through the library system!

Great Review! I read this book a few weeks ago and can't wait to see it in theaters-hopefully this weekend! I already have the second book-Sea Monsters sitting on my TBR pile.