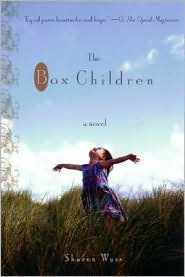 Eleven-year-old Lou Ann Campbell starts a diary on scraps of paper that she hides from her mother in a barrel behind the bunkhouse on her family's Texas wheat farm. Lou Ann's mother has had five miscarriages and Lou Ann has created the box children--five plastic dolls who live in a shoe box--to memorialize these "ghost babies."

The Box Children is Lou Ann's secret diary. Through her spare, sure voice, we share Lou Ann's experiences over the course of one extraordinary summer. The Box Children is also a record of Lou Ann's relationships--with her unstable and cruel mother, who intrudes into every aspect of Lou Ann's life; her adulterous father, whose relative sweetness compels Lou Ann to excuse serious excesses in behavior; her older brother, who rejects her as he struggles with what it means to "be a man"; and with the box children, who become her only companions.

Charming, jolting, and haunting, The Box Children chronicles Lou Ann's unflinching search for a connection to the wide world outside her farm (Author's Website).

I'm not sure this book review even wants to be written. One of my biggest pet peeves is sitting down to write a book review without the book sitting right in front of me. However, sometime between 9:45 PM Tuesday night and right now, this book has grown legs and walked away. I have checked under the couches, behind them, in the fridge, the other bookshelves. I even looked in the trash. It's gone. So I'm writing this with no book in front of me...here goes :)

One, I did not like this book at all. Lou Ann's mom was C-R-A-Z-Y, and instead of adding to the story it just made it weird.

Two, I'm still not sure what the whole point of the story was. I know it was a type of coming of age story, but I've seen it done much better.

And finally, the writing style wasn't smooth and flowing. I don't know if that was because she was trying to portray a journal written by a young girl or what, but I felt like it was very jumpy. I've read other books told through journal entries or letters and they did not seem to have this feel to them.

The Box Children was a book that I had heard "great" things about a few years ago in the book world. It's a hard book to find because it's no longer in publication (now I know why) but I managed to find a copy for super cheap from Amazon's bargain buys. Because I've been cleaning out my shelves, I've been coming across a lot of books that I had bought off of recommendations a long time ago and thought I would give it a shot. It started out ok, but has it got further into the story, I realized how very different it was.

As I stated above, Lou Anne's mom is crazy with a capital C. She has two children, and has lost five other babies. These five lost babies are represented by five dolls that Lou Anne keeps in a shoebox and calls "the box children." She communicates with the dolls and takes them outside and has conversations with them (its almost creepy). Lou Anne's mother is pregnant with another child, but we find out early in the story that something isn't right with this pregnancy. There's a lot of foreshadowing at this point, along with a great deal of talk about how sex is dirty.

Lou Anne's father is a wheat farmer. We find out early on, he likes the ladies (probably a fact that leads to the crazy wife). I happened to find him just plain disgusting. Also, there are a lot of farm hands, one who likes Lou Anne. I'm not sure how old he is, but Lou Anne is only 12. I kept thinking he was in his twenties, and if so CREEPY. However, I think he may have been Lou Anne's age from the way they interacted in the story. It was just never really explained.

So all in all, I'm giving the book two stars. One for the cover because I like it, and one for at least holding my attention enough to finish it.

Posted by Sunnysmileqt at 1:39 AM