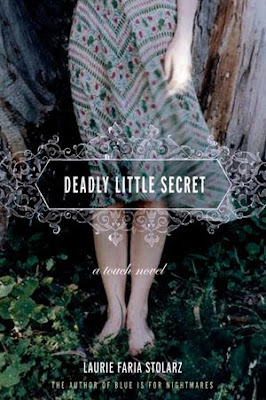 Until three months ago, everything about sixteen-year-old Camelia's life had been fairly ordinary: decent grades; an okay relationship with her parents; and a pretty cool part-time job at an art studio downtown. But when Ben, the mysterious new guy, starts junior year at her high school, Camelia's life becomes far from ordinary.

Rumored to be somehow responsible for his ex-girlfriend's accidental death, Ben is immediately ostracized by everyone on campus. Except for Camelia. She's reluctant to believe he's trouble, even when her friends try to convince her otherwise. Instead she's inexplicably drawn to Ben...and to his touch. But soon, Camelia is receiving eerie phone calls and strange packages with threatening notes. Ben insists she is in danger, and that he can help – but can he be trusted? She knows he's hiding something...but he's not the only one with a secret (Cover Blurb).

I'm not sure how I feel about this book. I finished it this past weekend, and am just now finding the time to write the review. The bad thing is, I don't really remember much about it. The story line just didn't stick with me.

I will say that the story did have a creepy vibe. I suspected that everyone was the bad guy, especially Camelia's boss Spencer. Something about that guy just gave me the heebie jeebies. Plus, whenever they mentioned him, I always pictured the guy who plays Spencer, the older brother on iCarly. It was a bit distracting...lol.

I really hated the ending of this book, and I'm hoping that the sequel (which I placed on hold at the library) will help to clear up some of my questions. I've heard that the second book is better than the first, so I'm hoping it will make me want to stick with the series.

Posted by Sunnysmileqt at 4:06 PM