Review: The Chosen One 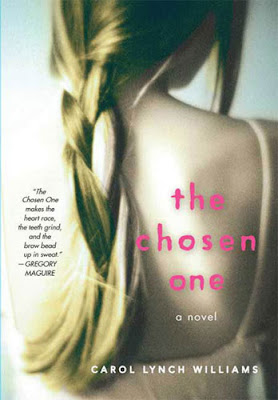 Thirteen-year-old Kyra has grown up in an isolated community without questioning the fact that her father has three wives and she has twenty brothers and sisters, with two more on the way. That is, without questioning them much---if you don’t count her secret visits to the Mobile Library on Wheels to read forbidden books, or her meetings with Joshua, the boy she hopes to choose for herself instead of having a man chosen for her.

But when the Prophet decrees that she must marry her sixty-year-old uncle---who already has six wives---Kyra must make a desperate choice in the face of violence and her own fears of losing her family forever (Cover Blurb).

One of the most chilling novels I have ever read, The Chosen One made me thank God for the freedoms and choices I have been allowed to make for myself my entire life, including deciding to whom I would be married.

This book had me riveted to my seat. I stayed up until two in the morning, turning pages, wanting to know the end to Kyra's story. At times, I wanted to reach into the pages, and save her myself.

Trapped in a cult, where she is being forced to marry her 60 year old uncle (eww), Kyra begins to rebel. Not only has she been sneaking books, but she's fallen in love and she wants to make her own choice. She wants to marry the boy that she loves, not the one that "The Prophet" has chosen for her. As the reader, we get to see her inner struggle. We see how the way Kyra was raised pulls her in one direction, while the ideas she has gained from her small interactions with the outside world pull her in another.

Definitely one of the best novels I read in 2009, The Chosen One should be on every readers TBR pile.

Posted by Sunnysmileqt at 4:54 PM