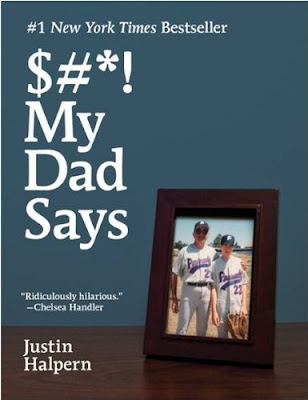 After being dumped by his longtime girlfriend, twenty-eight-year-old Justin Halpern found himself living at home with his seventy-three-year-old dad. Sam Halpern, who is "like Socrates, but angrier, and with worse hair," has never minced words, and when Justin moved back home, he began to record all the ridiculous things his dad said to him:

More than a million people now follow Mr. Halpern's philosophical musings on Twitter, and in this book, his son weaves a brilliantly funny, touching coming-of-age memoir around the best of his quotes. An all-American story that unfolds on the Little League field, in Denny's, during excruciating family road trips, and, most frequently, in the Halperns' kitchen over bowls of Grape-Nuts, Sh*t My Dad Says is a chaotic, hilarious, true portrait of a father-son relationship from a major new comic voice (goodreads.com).

This past winter, hubby and I found ourselves rolling on the floor laughing at the new comedy starring William Shatner, called "$#*! My Dad Says."  At the time, I had no clue it was actually based on a book and that there was a man as funny and too the point as William Shatner's character.   However, after a little research, I discovered that it was based on a true story and had to get the book.

At times, $#*! My Dad Says had me rolling on the floor laughing.  I one point I had tears falling from my eyes.  However, at other times, I found myself being quite put off by the language used, and found it to be a bit offensive.  I certainly wouldn't recommend this book to just anyone.

Halpern's father is too the point, crude and also, in a strange way, extremely loving.  While at times, I was extremely taken aback by what he had to say, I totally understood the point he was trying to make.  Despite his tough exterior, Halpern's father truly cares about his son and it shows through on the pages of this book.  All in all, $#*! My Dad Says was a decent read, but now one I'll be returning to any time soon.

Posted by Sunnysmileqt at 11:52 PM