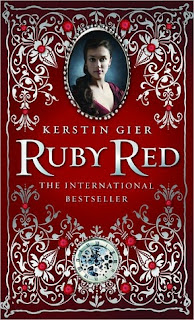 Title: Ruby Red
Author: Kerstin Gier
Pages: 336
Rating: 5/5
Gwyneth Shepard has spent the majority of her life listening to her grandmother and aunt boast about her cousin Charlotte, who inherited the family's time travel gene. Now that she is sixteen, she will make her first journey into the past any day, and the entire family is on edge. Even Gwen is a little curious about the specifics of time traveling, a subject her grandmother rarely goes into detail about. But everyone is in for a shock when it's Gwen who slides through time, not Charlotte. Suddenly the entire family is in an uproar, and Gwen is thrust into a world of a centuries-old secret society, mysterious devices, prophecies, and the mystery of a cousin who has disappeared back into time. With the aloof (and devastatingly handsome) Gideon, Gwyneth will have to decipher the mysteries and figure out where she stands as two powers struggle for control throughout time (cover blurb).
I honestly had no clue what Ruby Red was about until I started reading. I simply picked it up because I had seen the cover on a few blogs and thought it looked pretty. I also had no idea it was a translation, and couldn’t believe how well it had been done. I’ve read other translations (or tried to read them) and didn’t feel that they were able to convey the emotions when the translated them from their original text. Ruby Red surprised me.

Ruby Red is a story about time travel. Gwyneth’s family has carried the time traveling gene for generations. The time and date of a person’s birth determines if the will, in fact, inherit that gene. For Gwyneth, she has never worried about because her cousin Charlotte was born with the gene. Charlotte has spent her life in secret meetings, obtaining training about correct dress and speak and how to use a sword. However, when the time comes, Gwyneth is the one that time travels, not Charlotte.

Not only is Gwyneth ill prepared for time travel, she certainly is ready to meet Gideon her time traveling partner from another prominent family. Gideon appears to be stuck up and snobby, but by the end of Ruby Red, I think both Gwyneth and myself had developed quite a little crush on him!!

All in all, I absolutely adored Ruby Red and cannot wait for the second book in the trilogy to be translated and released in the US. It was just so good!!

Posted by Sunnysmileqt at 4:33 PM