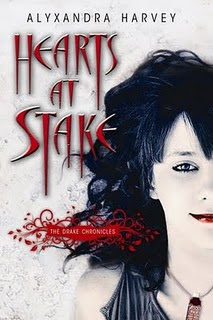 On Solange’s sixteenth birthday, she is going to wake up dead. As if that’s not bad enough, she also has to outwit her seven overprotective older brothers, avoid the politics involved with being the only daughter born to an ancient vampire dynasty, and elude Kieran Black—agent of an anti-vampire league who is searching for his father’s killer and is intent on staking Solange and her entire family.

Luckily she has her own secret weapon—her human best friend Lucy—who is willing to defend Solange’s right to a normal life, whether she’s being smothered by her well-intentioned brothers or abducted by a power-hungry queen. Two unlikely alliances are formed in a race to save Solange’s eternal life—Lucy and Solange’s brother Nicholas, and Solange and Kieran Black—in a dual romance that is guaranteed to jump start any romance-lover’s heart.

Even fans of the genre who’ve seen it all will find a fresh read with kick-butt characters and family dynamics that ring true for all brothers and sisters—vampire or otherwise (goodreads.com).

I avoided Hearts at Stake for a long time, simply because of the cover.  I thought it was ugly, and dare I say it, made the book look stupid.  However, after reading a few reviews on Goodreads, I felt the need to at least give it a try.  I'm awfully glad I did.

Hearts at Stake is the first book in the Drake Chronicles and tells the story of Solange Drake, the first female vampire to be born not made.  The story is told from two perspectives - Solange and Lucy her best friend who is very much a human.  I absolutely adored the character of Lucy.  I thought she was spunky and fresh and not scared to hold her ground amoung a group of vampires.  Plus, I found her relationship with Solange's brother Nicholas to be adorable.

Hearts at Stake is a fast paced, fun read that at times can be a bit predictable.  The writing is good and I loved the characters.  I look forward to reading more about the Drake family.  Plus, the other covers in the series are so much better!!

Posted by Sunnysmileqt at 3:07 AM