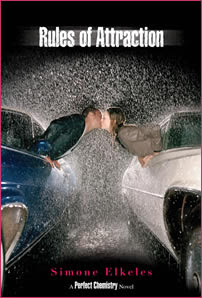 When Carlos Fuentes returns to America after living in Mexico for a year, he doesn’t want any part of the life his older brother, Alex, has laid out for him at a high school in Colorado . Carlos likes living his life on the edge and wants to carve his own path—just like Alex did. Then he meets Kiara Westford. She doesn’t talk much and is completely intimidated by Carlos’ wild ways. As they get to know one another, Carlos assumes Kiara thinks she’s too good for him, and refuses to admit that she might be getting to him. But he soon realizes that being himself is exactly what Kiara needs right now (goodreads.com)

I've been so excited for this book to come out and last Tuesday I raced to Borders to grab it. Low and behold, Borders didn't have it in stock. Thank goodness I have internet on my phone, because I promptly ordered it off of Amazon.com and had it in my greedy little hands by Thursday. By that time, I had already started reading another book so Rules of Attraction got pushed to the weekend.

I've not been shy about how much I loved Perfect Chemistry and wanted to marry Alex. It was my favorite book of last year, and one I always return to when I just need to get away for awhile. I was worried that Rules of Attraction wouldn't live up to the hype of Perfect Chemistry, but I had no reason to worry. Simone Elkeles has done it again. In fact, I almost (yes folks...I almost) liked it better than Perfect Chemistry...I certainly thought Kiara was a better female lead.

Carlos is Alex's younger brother. He's been shipped back to the US to live with Alex, after getting caught up in the gang life in Mexico. He's got an attitude, and he's heading for trouble...and it all so hot. I just couldn't get enough of him. Within a week of being in the US, drugs are found and Carlos's locker at school. Alex works a deal for Carlos to move in with the Westfords as a type of probation rather than being sent back to Mexico or juvie. As Carlos lives with the Westfords, we begin to see glimpses of who he really is. Below that tough exterior, is a truly amazing man who is slowly falling for Kiara Westford.

Kiara is smart and independent, but has never really been popular at school or with the boys. She's certainly not the type of girl that Carlos would be interested in. She wears baggy shirts, hiking boots, and talks with a stutter. And I adored her. Her character is so real. The one issue I had with Perfect Chemistry was how fake Brittany could come across...it didn't make me love the book any less, I just didn't think she was always as strong as she should have been as the female lead. Kiara, on the other hand, never once let me down. She's full of spunk and attitude and always has a surprise up her sleeve. She truly was the perfect girl for Carlos.

I don't want to give anymore of the plot away, but I highly, highly recommend these two books...in fact, I recommend them so much I'm going to do a giveaway...more details to come!!

Posted by Sunnysmileqt at 12:44 AM

I had to request that my library buy this book...it should be in soon. I can't wait to read it!!