So here's the pictures I promised of the backyard we've been working so hard on. My flowering bushes are really starting to flower and just look beautiful. We're supposed to get frost tonight though so I just hope they make it.

Here's the picture of the new "shed" we put up this year. I call it the extra large tupperware container in the backyard. Putting the new flowerbed around it really helped make it look a lot better, and now I think it's a cute little addition to the back yard! 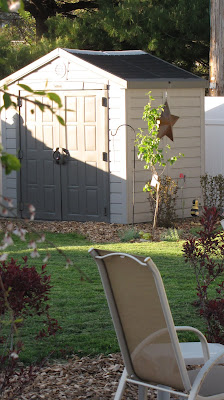 This is my favorite part of the finished back yard. The gazebo and the new patio furniture. We bought the gazebo last year and it's permanently bolted to the concrete (this is actually the second one...the first one blew away in a storm because my hubby didn't think it needed screwed down). It makes a great covering for the furniture and I love how classy they look together. 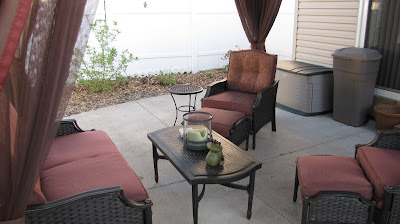 From a different angle...see my cute little frogs on the table :) 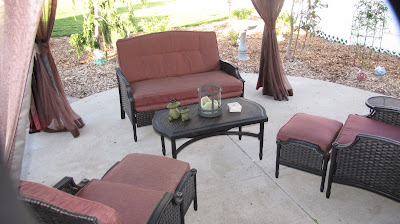 The bed around the patio and fire pit from one angle... 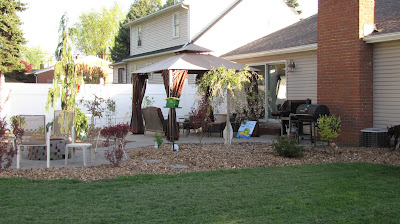 and from the other angle. 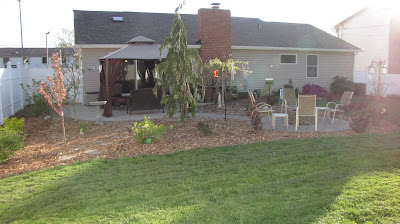 This is the firepit that we put in two years ago. Hubby and his dad hand laid all the bricks and cemented them in. It's great because we don't have to worry about putting new sand between the bricks every year and it never moves. We added the red leafed sand cherry bushes around it last year. It's great for those cool summer nights. 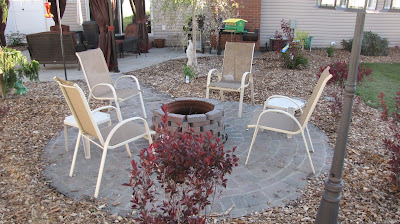 Here's my pink bleeding heart...I planted it as a small start last year and it's quadrupled in size. 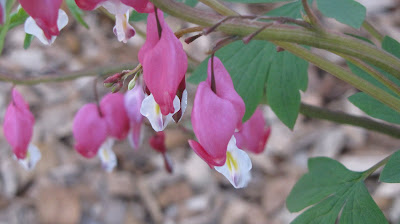 My azalea on the back side of the house. It's loaded with flowers this year and just gorgeous. 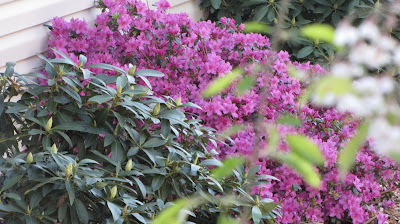 So that's my backyard...we're talking about adding a small water feature next year, but I told hubby I might just take a year off from yard work!

Posted by Sunnysmileqt at 12:55 AM

That looks amazing!!! I'm trying to convince my husband that we need a fire pit or a fire place out on the patio. He's not convinced yet, but I'll keep working on it :)
Thanks so much for visiting my blog!

Wow! It looks great!!! We're starting on our patio soon and I was not looking forward to it, but now seeing yours I'm getting kind of excited, hahaha! :)

This is fantastic! You inspire me. I was going to do some fun stuff to our yard last spring and then we had so much rain and cold weather I didnt get to it. What you have here has inspired me again (even on a cold day!)