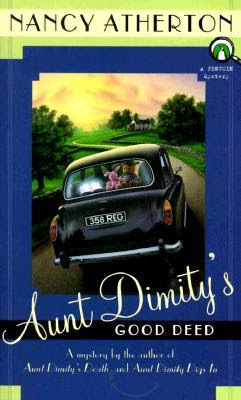 Thanks to Aunt Dimity, Lori Shepherd was lucky enough to have had a fairy-tale courtship complete with a Handsome Prince and a cozy, honey-colored castle in which he popped the question. It all happened so quickly, so effortlessly, that Lori fell in love with her blue-blooded prince before she really knew who he was. And maybe that's where she made her first mistake. Now married for two years to said prince - Bill Willis, a workaholic lawyer who is, she admits, "honest and scrupulously considerate about his socks" - Lori finds herself inconsolably depressed. She loves Bill dearly but all he does is work, work, work - even their honeymoon was interrupted by a flurry of faxes. And to make her feel even worse, her busybody aunts-in-law keep badgering her about when they will have a new little Willis! But how will that ever happen if she never even sees her husband?

Seeking to recapture the romance in her young marriage, Lori plans a second honeymoon at Aunt Dimity's English cottage. But at the last minute, Bill, true to form, can't make it, so Lori's reliable as-the-sunrise father-in-law stands in (how romantic!) - only to disappear minutes after their arrival, with Lori's pink flannel bunny, Reginald, in tow. Inspired by Aunt Dimity and accompanied by her very precocious twelve-year-old friend Nell, Lori packs the car and sets off on a backroads search for Willis, Sr. Nell proves herself a helpful guide (keeping Lori on the right side of the road!) as well as a mistress of disguise, while Lori finds herself aghast at her own unseemly attraction to Bill's dashing English cousin, Gerald. Soon Lori, Nell, and the ghostly Aunt Dimity find themselves at the center of a centuries-old Willis family scandal that, if revealed, could mean the end of life as they know it, for Willises on both sides of the Atlantic (bn.com).

Lori is really struggling with her life. Her husband Bill, who was the world's sweetest man when they first met, has turned into the biggest workaholic on the planet. To make matters even worse, Lori is feeling incredible amounts of pressure to have a baby and she can't figure out how that will ever happen when Bill's never home!

Lori plans a second honeymoon, hoping the time away from the office and the fresh England air will due Bill a world of good. However, things quickly go down hill, when Bill is called away on business and Lori makes the trip with her father in law. Then to make matters worse, Willis Sr disappears on a wild goose chase trailed by none other than Aunt Dimity and Lori's flannel bunny Reginald!

Lori sets out with Nell, Emma and Derek's daughter in tow and always seem to fall one step behind Willis, Sr. But along the way, they met several family members of the English side of the family and mysteries and secrets abound. Furthermore, the whole situation is complicated by Gerald Willis, Bill's dashing English cousin who seems to take a liking to Lori.

There's nothing I like more than family drama! And boy this book had it all...secret affairs, murder, mystery and mayhem. It was great to see how it all fit together, and how Aunt Dimity touched the lives of others. I just cannot seem to get enough of this great series and hope that it continues to be this enjoyable!

Posted by Sunnysmileqt at 4:46 PM

This seems like a great series:) I am definitely adding this book and the others to my TBR pile.