Review: Aunt Dimity and the Duke 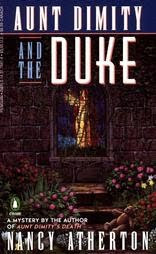 Emma Porter is forty, fat, frumpy, and a passionate amateur gardener. When her longtime lover dumps her for a younger woman, Emma escapes the cloying sympathy of family and friends by setting out on a summer-long driving tour of England 's glorious gardens. A Dimity-contrived coincidence brings her to Penford Hall, a sprawling Gothic mansion in Cornwall , where the Duke of Penford is awaiting a miracle. An ancient artifact known as the Lady's lantern must light of its own accord or the Penford line will come to an end--but the lantern is missing.

Convinced there's more than one mystery to solve at Penford Hall, Emma accepts the Duke's invitation to stay on and restore the once-glorious chapel garden to its former beauty. The dark rumors surrounding the death of rock star Lex Rex, who drowned five years ago in the Duke's yacht, and the suspicious near-death of the Duke's beautiful, supercilious cousin, set Emma--with Aunt Dimity's ghostly guidance--on the path to Penford Hall's secrets and the discovery of unexpected love (aunt-dimity.com).

Once I got over the fact that this book would make no mention of Lori or the Willis family, I really enjoyed it. This book actually takes place before the time of Aunt Dimity's Death, and tells the story of Lori's numbers at Dimity's cottage in Finch.

We are first introduced to Emma and Derek in Aunt Dimity's Death. Emma had completely redone the garden, and Derek was in charge of all the home renovations. Also, it is mentioned several times throughout the book about an incident that happened at a chapel in Penford Harbor. Well, this book tells the story of that chapel and it was really well written and a great read.

I really enjoyed the character of Emma. She is so uncertain of herself in the beginning of the novel, and not really happy with her life. She's convinced herself that all is right in her world, and heads out on a journey to see all the famous gardens in England. After a chance encounter with the Pym sisters, Emma finds herself a guest of the Duke of Penford Hall. There she is asked to redo the garden for an old chapel that holds great meaning to both the Duke and the town of Penford.

Derek, and his two children Nell and Peter are also at the hall, hired to make some renovations on the property. Derek is still grieving the loss of his first wife, and his children are hiding a big secret from him. It takes both the hall and Emma to make him see what is really going on in his life.

One thing I loved about this novel, was the mystery and the intrigue surrounding this massive hall. Even the Duke and his loyal servants come across as a bit creepy and secretive. Towards the end of the book, this was really a page turner, and I couldn't wait to find out the answer to the mystery. The twists and turns made for a great surprise at the end!

Posted by Sunnysmileqt at 4:26 PM