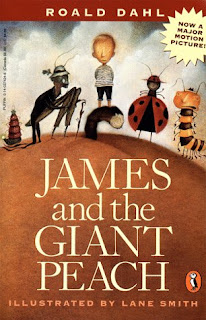 When poor James Henry Trotter loses his parents in a horrible rhinoceros accident, he is forced to live with his two wicked aunts, Aunt Sponge and Aunt Spiker. After three years he becomes "the saddest and loneliest boy you could find." Then one day, a wizened old man in a dark-green suit gives James a bag of magic crystals that promise to reverse his misery forever. When James accidentally spills the crystals on his aunts' withered peach tree, he sets the adventure in motion. From the old tree a single peach grows, and grows, and grows some more, until finally James climbs inside the giant fruit and rolls away from his despicable aunts to a whole new life. James befriends an assortment of hilarious characters, including Grasshopper, Earthworm, Miss Spider, and Centipede--each with his or her own song to sing. Roald Dahl's rich imagery and amusing characters ensure that parents will not tire of reading this classic aloud, which they will no doubt be called to do over and over again! (goodreads.com)

James and the Giant Peach is a famous work by Roald Dahl. This book has been frequently challenged and banned for its content, including the abuse that James experiences. Others have claimed that the book promotes alcohol and drug use, that it contains inappropriate language, and that it encourages disobedience to parents.

I first heard the story of James and the Giant Peach when I was in kindergarten.  Each night my mom would read me a few chapters before bedtime.  In this way, I was introduced to great children's "classics" like Charlotte's Web, Stuart Little, and Charlie and the Chocolate Factory.  When I started looking into Banned Books Week, I was astonished to see JATGP on the list.  I immediately called my mom.  I asked her if she ever found anything "offensive" within the book.  Here response - "How can a children's book about a giant peach be considered offensive?"  My thoughts exactly.

At the beginning of the book we are introduced to James, a young boy who was orphaned when his parents were killed in a tragic accident.  He is sent to live with his horrible Aunts Spiker and Sponge.  James' aunts are lazy and treat him with little to no respect.  He is made to work hard jobs and when the giant peach appears he is locked in his room with no food.  It is this abuse that caused parents to try to ban the book.  However, in my mind, how is the abuse received by James any different than the abuse caused by the evil step mother in Cinderella - a fairy tale that almost all young girls in America know by heart.  What makes this book different?

Another compliant by parents was the use of offensive language.  I found two instances in the book where the centipede uses the term "ass."  Given the time period that the book was written and the context in which the term was used, I can pretty much infer that he was referring to a sense of stupidity like that of a donkey, not that of a human body part.  I'm also pretty sure that if talk to your children and explain the meaning behind the words, there are much worse things that can be said than the word "ass."

Despite the controversy, I still loved and enjoyed every bit of James and the Giant Peach.  Dahl's writing was smooth and flawless and, as always, his characters were wonderful.  I can't wait until my own son or daughter is old enough to enjoy this book and I get the chance to share the story of James with them.

Posted by Sunnysmileqt at 9:46 PM

What a great post about one book you had personal experience with. I love that you shared this childhood memory for banned book week.