Review: The Girls from Ames 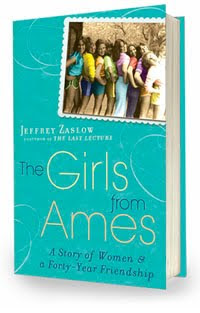 Title: The Girls from Ames - A Story of Women and a Forty Year Friendship
Author: Jeffrey Zaslow
Pages: 326
Rating: 4.5/5

Meet the Ames Girls: eleven childhood friends who formed a special bond growing up in Ames, Iowa. As young women, they moved to eight different states, yet managed to maintain an enduring friendship that would carry them through college and careers, marriage and motherhood, dating and divorce, a child’s illness and the mysterious death of one member of their group. Capturing their remarkable story, The Girls from Ames is a testament to the deep bonds of women as they experience life’s joys and challenges — and the power of friendship to triumph over heartbreak and unexpected tragedy.

The girls, now in their forties, have a lifetime of memories in common, some evocative of their generation and some that will resonate with any woman who has ever had a friend. Photograph by photograph, recollection by recollection, occasionally with tears and often with great laughter, their sweeping and moving story is shared by Jeffrey Zaslow, Wall Street Journal columnist, as he attempts to define the matchless bonds of female friendship. It demonstrates how close female relationships can shape every aspect of women’s lives — their sense of themselves, their choice of men, their need for validation, their relationships with their mothers, their dreams for their daughters — and reveals how such friendships thrive, rewarding those who have committed to them.

The Girls from Ames is the story of a group of ordinary women who built an extraordinary friendship. With both universal insights and deeply personal moments, it is a book that every woman will relate to and be inspired by (girlsfromames.com).


This book wasn't on my plan to read. In fact I didn't even own it before Friday, but last week was a horrible week for me. Work was treacherous, and it made me emotional and irritable when I was at home. Plus hubby had a horrible week also, so the two of us combined were quite the picture. Because of all this, I took a half day off on Friday and found myself browsing the shelves at Borders, looking around and hoping to push away the blues. All the books I had started at home were dark and weren't helping my mood so I was looking for something a bit more uplifting. I had seen The Girls from Ames when it was originally published. At that time, Borders had named it their summer book club choice and it was hailed as one of the top ten reads of 2009 by People magazine. Still I just wasn't interested enough to pick it up. However, on Friday it was on the BOGO 50% off table, so I grabbed it with another book I really wanted.

I've never been a huge fan of memoirs...I think something about them scares me, so I tend to shy away from them. It's ridiculous that I do because once I start them I normally find myself very much enjoying them. This one was no exception. Once I made it home, I started flipping through the pages, intrigued by the pictures of this group of women. I wanted to know what made them so special, and how they had managed to remain friends for so long. I settled in on the couch, and soon found myself surrounded by the world of Ames, and a friendship that started so long ago.

I must confess, I've never had a lot of girlfriends. Growing up on a farm, I was pretty isolated from neighbors so I found myself spending all my time with my brother and my mom and dad. We had a close knit family, and I never really learned to relate to girls as well ( I was very much a tomboy). Once school started, I found girls to be petty and selfish and always played with the boys. Even as I got older, some of my best friends were males. I didn't develop a really strong "girl friendship" until I got to college. We spent four years being roommates and she was my maid of honor in my wedding. But once life got involved, we found ourselves living miles apart, each creating our own families and soon lost touch. I still think of her but the idea of trying to reconcile what was there, just makes me tired. Now as a married woman, I find myself being a friend to a couple rather than just one person. All of our friends now are married with children, and all of the husbands grew up together. Its a close knit group that I've easily been absorbed into and a place in the world where I feel very comfortable. However, after reading The Girls from Ames, I've wondered if I missed out on something wonderful and satisfying in these lifelong friendships.

Despite my lack of friends (now I just sound like a loser...lol), I still found it easy to relate to these women, and could see how they had managed to stay friends for so long. They were a group that worked at staying friends, never broke communications - even when times were at their worse, and created life long bonds with each other. Each chapter opened up a new "leaf on their tree of life." Zaslow didn't really tell me anything I didn't already know about women's friendship, but he certainly showed me the benefits that lasting relationships can have on a woman's life. By the last page, I felt as though I had spent days with these women and my heart broke when there's broke, and I laughed as they laughed. It was certainly the kind of book I need to lift my spirits at a time when I was feeling so down and out.

I did a bit of research on the book too and saw that it's being developed into a movie for Lifetime. I'm rather excited for this development and look forward to the finished product. I think all women should sit down and spend an afternoon or two with these girls. I believe we'll all walk away feeling a bit better!

Posted by Sunnysmileqt at 12:03 AM