Review: A Bend in the Road 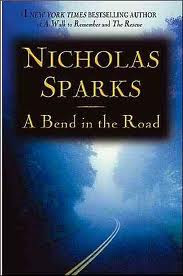 Miles Ryan's life seemed to end the day his wife was killed in a hit-and-run accident two years ago. Missy had been his first love, and Miles fervently believes she will be his last. As a deputy in the North Carolina town of New Bern, Miles Ryan not only grieves for Missy, but also longs to bring the unknown driver to justice. Then Miles meets Sarah Andrews. The second grade teacher of his son, Jonah, Sarah had left Baltimore after a difficult divorce to start over in the gentler surroundings of New Bern. Perhaps it's her own emotional wounds that make her sensitive to the hurt she first sees in Jonah's eyes, and then his father's.

Tentatively, Sarah and Miles reach out to each other. Soon they are both laughing for the first time in years . . . and falling in love. Neither will be able to guess how closely linked they are to a shocking secret -- one that will force them to question everything they ever believed in . . . and make a heartbreaking choice that will change their lives forever (nicholassparks.com).

This was probably one of my least favorite Nicholas Sparks books. I had a hard time really connecting with any of the characters, and really despised the main character Miles Ryan. I think part of the problem was that I hated his name immensly. Plus, he seemed to suffer from horrible mood swings going from Mr Nice Guy to Mr Nasty Pants in a matter of minutes. I also thought Sarah's character in general was weak. She just didn't seem to have much of a backbone which I found odd for a character of Sparks, but there's a first time for everything.

The one character in the book I did find endearing was Mile's son Jonah. I thought he was a very sweet little boy, and felt horrible for all the trauma he had to suffer in his young life. I really wanted to see things work out in a way that would be good for him.

One of my biggest pet peeves about this book were the intertwined narrations by Missy Ryans "killer." It certainly ruined the mystery for me, as I was able to figure out who the person was by about page 50. I wish Sparks would have approached this aspect of the novel in a different way and somehow lead into that mystery differently.

I'm not going to let this one bad experience keep me from reading more of Spark's back list, but it did slow me down a bit. I had to give myself a bit of break but will probably continue to pick up his books throughout the month.

Posted by Sunnysmileqt at 12:45 AM