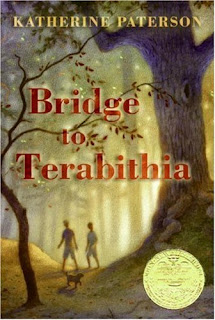 Title: Bridge to Terabithia
Author: Katherine Paterson
Pages: 163
Rating: 3/5
Jess Aarons' greatest ambition is to be the fastest runner in his grade. He's been practicing all summer and can't wait to see his classmates' faces when he beats them all. But on the first day of school, a new girl boldly crosses over to the boys' side and outruns everyone.
That's not a very promising beginning for a friendship, but Jess and Leslie Burke become inseparable. Together they create Terabithia, a magical kingdom in the woods where the two of them reign as king and queen, and their imaginations set the only limits (goodreads.com).

The novel's content has been the frequent target of censors and appears on the American Library Association list of the 100 Most Frequently Challenged Books of 1990-2000 at number eight.  The censorship attempts stem from death being a part of the plot; Jess' frequent use of the word "lord" outside of prayer; concerns that the book promotes secular humanism, New Age religion, occultism, and Satanism; and for use of offensive language.

The story itself is very character driven, definitely not plot driven like most books written for younger audiences.  This book also dealt with some rather heavy emotional issues, that would be tougher for some kids to handle (do I see this as a reason to ban the book...ummm most certainly not).  I do think that this book is an important book for older children and young adults to read.  It definitely should have its place among required reading in schools, as it does show children that life is not always roses and lollipops.

I'm definitely glad I read the book, especially for banned book week.  It was interesting to read the books, and then see why they were banned.  Some of the reasoning is completely asinine.  Also, it helped me to reacquaint myself with books that I haven't even thought about in years!

Posted by Sunnysmileqt at 1:47 AM