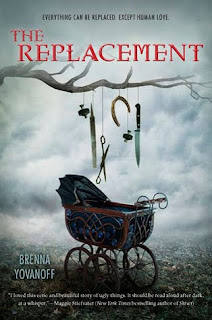 
Mackie is not one of us. Though he lives in the small town of Gentry, he comes from a world of tunnels and black murky water, a world of living dead girls ruled by a little tattooed princess.
He is a Replacement - left in the crib of a human baby 16 years ago. Now, because of fatal allergies to iron, blood, and consecrated ground, Mackie is slowly dying in the human world.
Mackie would give anything to live among us. He just wants to play bass guitar and find out more about an oddly intriguing girl named Tate. But when Tate's baby sister goes missing, Mackie is drawn irrevocably into the underworld of Gentry, known as Mayhem. He must face the dark creatures of the slag heaps and find his rightful place - in our world, or theirs (theaudiobookstore.com).

In one word, this book was just - WEIRD.  I had high hopes for this one.  The cover was creepy as could be and the description sounded amazing.  I haven't read any books on changelings and the idea was quite new to me.  I figured with Halloween right around the corner, this would be a great read for the week.  I was wrong.

The audio for this book was good - having it read to you with different voices made it all the more creepier.  However, despite all this, I thought the book was boring and much too long.  I just felt like it took forever in between things happening and then the ending was extremely drawn out.  A few times, I almost felt like stopping the audio and moving on to something else, but the reader in me just wouldn't let it go.  I guess I kept hoping it would get better.

One of my main issues with the story was the language.  While I'm not a prude, I just felt like The Replacement had an overwhelming amount of the F word mingled among its many "pages."  I think if I hadn't been listening to this on audio, I probably wouldn't have noticed it as much, but I found it to be distracting and out of place on the audio.  I also found the few sexual situations to be a bit disconcerting.  Again I just found them to be a bit awkward and unjustified.  They almost seemed to be used as a bit of a filler.  It bothered me how front and center they seemed to be in a book aimed at young adults.

I do feel that what the book lacked in action, it definitely made up for in creepiness.  That's why I did rate it at least 2.5 stars.  I definitely didn't want to listen to this one after dark.  The narration helped emphasize this fact, and I found it to be very chilling.

All in all, this book as gotten pretty good reviews around the blog world.  It may have just been the wrong type of book for me, I'm not sure.  Has anyone else read this, and if so what are your thoughts?

Posted by Sunnysmileqt at 5:30 PM