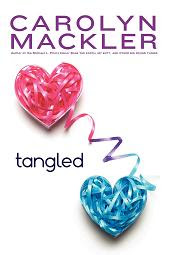 Not the state of being, but a resort in the Caribbean. Jena, Dakota, Skye, and Owen are all there for different reasons, but at Paradise their lives become tangled together in ways none of them can predict. Paradise will change them all.

It will change Jena, whose first brush with romance takes her that much closer to having a life, and not just reading about those infinitely cooler and more exciting. It will change Dakota, who needs the devastating truth about his past to make him realize that he doesn’t have to be a jerk just because people think he’s one. It will change Skye, a heartbreakingly beautiful actress, who must come to terms with the fact that for once she has to stop playing a role or face the consequences. And it will change Owen, who has never risked anything before and who will take the leap from his online life to a real one all because of a girl he met at Paradise….

From confused to confident and back again, one thing’s certain: Four months after it all begins, none of them will ever be the same (carolynmackler.com).

I adored this book. I love how it was written in four separate parts, with four separate characters. It was so much fun to see how each of the four characters lives became tangled with each other. It was definitely different, and the fast pace kept me turning the pages as quickly as I could.

I had two favorite characters in this book. The first was Jena, who reminds me a lot of myself when I was younger. She's obsessed with quotes, and doesn't have a ton of confidence, but in the end is a stronger person due to the things she has to work for. My other favorite was Dakota. He's a real ass in the story, but I've always had a thing for bad boys. However, much to my mom and dad's relief, I did not marry one...lol. I think that's why I like to read about them so much!!

This is the first Carolyn Mackler book that I've read, but I'm sure it won't be my last. I'll be looking for some more titles from her next time I go to the library.

Also, I think this book would make a great movie. It reminded me a bit of The Sisterhood of the Traveling pants in the way it was written and I loved that movie and I think this one has just as much potential!

Posted by Sunnysmileqt at 2:41 AM

I think this would make a great movie! I really liked Jena's character too. The only character I didn't like that much was Skye. Bad boys are fun to read about, especially Alex Fuentes in Perfect Chemistry. Talk about the ultimate bad boy romance (Carlos wasn't too shabby either).

Alex Fuentes is the ultimate bad guy...I still get a little warm when I look at the cover of Perfect Chemistry...lol.

You may also enjoy the Peaches series by Jodi Lynn Anderson, if you haven't checked it out already!