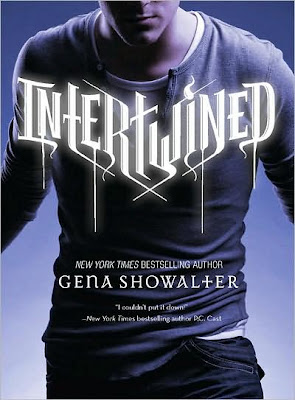 Most sixteen-year-olds have friends. Aden Stone has four human souls living inside him:

One can raise the dead.

One can tell the future.

And one can possess another human.

Everyone thinks he's crazy, which is why he's spent his entire life shuffled between mental institutions and juvie. All of that is about to change, however. For months Aden has been having visions of a beautiful girl -- a girl who carries centuries old secrets. A girl who will either save him or destroy him.

Together they'll enter a dark world of intrigue and danger . . . but not everyone will come out alive (genashowalter.com).

I've read a few of Showalter's novels that she's written for adults, so I had an idea of what to except from her writing style and the type of characters she likes to write. Intertwined didn't disappoint. I enjoyed the main character Aden, and really liked his friend Riley who was also a werewolf. However, I thought the story was a little slow in parts, and there's still some major story lines that were left hanging. I was glad to see that the sequel "Unraveled" will be released this coming September.

One thing I liked about this book was the fact that it is introducing different paranormal characters into play. Besides vampires and werewolves, there's witches and fairies and goblins. Plus it really plays on the fact that Vlad the Impaler was in fact Dracula and that he is still alive and well in Romania. That was an interesting twist, and one that was fun to think about.

The idea of Aden living with four other souls within his body is an interesting one, and has similar parallels to Showalters Lords of the Underworld series where each man is doomed to live his life along side a demon. Having read some of these books, I could definitely pick up on similarities between the two stories. As an adult, I enjoyed the Lords of the Underworld series better, and felt that Intertwined was missing something. I'm not sure what, and it won't stop me from seeing what happens in the sequel, I just hope that Unraveled moves a bit faster now that he have all of Aden's back story.

Posted by Sunnysmileqt at 3:14 AM

This sounds really good. I like the fact it has different paranormal characters. I will have to check it out. Thanks for stopping by my blog.

"One thing I liked about this book was the fact that it is introducing different paranormal characters into play. Besides vampires and werewolves, there's witches and fairies and goblins. Plus it really plays on the fact that Vlad the Impaler was in fact Dracula and that he is still alive and well in Romania."

Thanks so much for the review, this one aspect, plus I love Showalter's books, was the key to my whole enjoyment of this book.
I loved it and are counting the days till Unraveled is released.

I had a really hard time getting into this one. It was just too slow for me, and missing something...