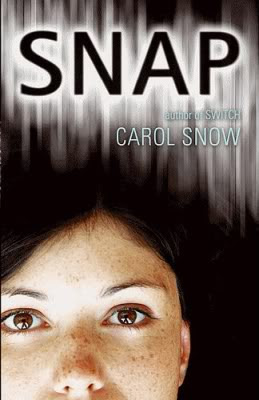 Madison Sabatini thought she knew who she was: an almost-sophomore with a bright future. The newest photographer on her school paper. A shopaholic with great hair and a fabulous wardrobe. Then, in a flash, everything changed.

Now she's stuck in Sandyland, a gloomy beach town in the middle of nowhere, living with her parents in a crappy hotel "suite." Instead of spending the summer with her friends at home, she's hanging out with pink-haired Delilah, an artist who works in a shop called Psychic Photo, and a skater boy named Duncan who's totally not her type. Except, maybe he is . . .

Determined to make the best of things, Madison throws herself into her one passion: photography. But when strange figures start appearing in her pictures—people who weren't there when she snapped the shots, people who are later reported dead—she begins to question everything about who she is . . . and who she wishes she could be (harperteen.com).

It's been over two weeks since I finished this book, and my mind is a bit fuzzy on the details. One thing I know for sure though...this book was boring! I loved the premise and thought it would be spooky and creepy and have some big plot twist. Not so much...instead I found it to be rather hokey and slow and childish.

I know this is a young adult book, but to me it seemed more like a book written for middle schoolers. The writing style and character developement seemed very elementary for me. I certainly wasn't grabbed by the book like I was by the description.

Also, I found the main character Madison to be spoiled, whiney and annoying as all get out. She acted so privileged and thought it was the end of the world when she found out she couldn't have the best clothes, the most money and the super vacations. I thought it was shallow and gave people a skewed perception of what life is really like.

If you absolutely want to read this one, I'd find it at the library...I certainly wouldn't spend the money on buying it!!

Posted by Sunnysmileqt at 4:16 PM