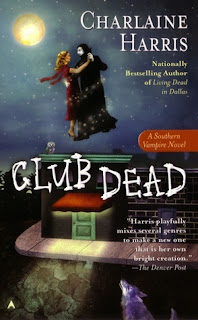 Sookie Stackhouse always found it difficult to date - she's cute, but not many guys are comfortable with her mind-reading abilities. But vampires have no problems with Sookie's talent - she can't pick up much of anything form the undead.

But there's only one vampire Sookie Stackhouse is involved with - at least voluntarily - right now, and that's Bill. But recently he's been a little distant - in another state distant. His sinister and sexy boss Eric has an idea where to find him, and next thing Sookie knows, she's off to Jackson, Mississippi, to mingle with the underworld at Club Dead. It's a dangerous little haunt where the elusive vampire society can go to chill out and suck down some Type O - but when Sookie finally finds Bill, he's not only in trouble, but caught in an act of serious betrayal. Should she save him, or sharpen some stakes?
This is the third Sookie Stackhouse book that I've read this year, and by far my favorite so far.  I'm pretty sure that it had to do with the increase in Eric in this book, or the introduction of Alcide.  Both were equally appreciated.

In this third installment, Bill, Sookie's vampire boyfriend is missing.  Plus he's been keeping secrets from a lot of people, and now it seems that everyone is out to get him and Sookie.  Sookie has to take her talents to Jackson, Mississippi where she hopes to find the clues to bring Bill home.  However, along the way, she finds more trouble than good.  Something that seems to be more and more common the longer she hangs with the vamps.

I'm really beginning to like Sookie as I get to know her better and better with each passing book.  She no longer seems like the ditzy blond I had first seen her as, and I'm liking her better and better.  Plus, I love the fact that she's branching out and meeting more and more Otherworldly creatures.  The introductions of more werewolves and shifters really made the book better I think.  Plus, there was less of stuffy Bill.

I cannot wait to continue this series, and I'm sorry its taken me this long to get into this series.  I had made myself a goal of reading four of these books this year, but I might go ahead and read the whole dang series!