Review: Between the Lines 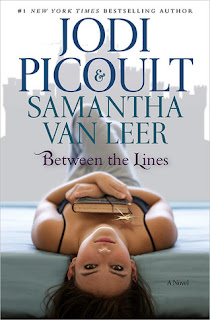 Delilah is a bit of a loner who prefers spending her time in the school library with her head in a book—one book in particular. Between the Lines may be a fairy tale, but it feels real. Prince Oliver is brave, adventurous, and loving. He really speaks to Delilah.

And then one day Oliver actually speaks to her. Turns out, Oliver is more than a one-dimensional storybook prince. He’s a restless teen who feels trapped by his literary existence and hates that his entire life is predetermined. He’s sure there’s more for him out there in the real world, and Delilah might just be his key to freedom.

Delilah and Oliver work together to attempt to get Oliver out of his book, a challenging task that forces them to examine their perceptions of fate, the world, and their places in it. And as their attraction to each other grows along the way, a romance blossoms that is anything but a fairy tale.
I've seen this book floating around the blogosphere for a few months now, and was hesitant to try it.  I'm always leery of books with a lot of "buzz" especially those by big name authors who are trying out something new.  However, after reading so many positive reviews and gaining a bit of curiosity about the plot line I thought I'd give it a try.  The premise was so intriguing and it got me thinking...what if their was a life within the pages of my favorite books and they continued to live lives long after the covers closed?  I had to find out where this was going to go!
I started this book in audio, but quickly decided that it was a book that needed to be read and enjoyed in print.  The illustrations are fabulous and they really help to set the tone of the story.  I picked it up at Target and re-started it, and found that I enjoyed it much more that way.
Between the lines tells the story of Delilah, a high school freshman that is obsessed with a fairy tale.  She's avoiding her best friend, freaking out her mom, and talking to a book like it's real.  But, for her, the book talks back.  Prince Oliver is trapped within the pages of the story, hoping to get out, and Delilah is the first to hear him and respond.  Soon the two are falling in love, and the book leads us through a series of tries to get Oliver out from between the pages.
I really enjoyed the pacing and plot of this story.  The writing was great, and I wasn't disappointed in it.  Jodi Picoult is an extremely talented writer, and it really shows through in Between the Lines.  I loved this book up until the last 50 pages or so, and then I felt like the book just fell apart and came to an abrupt end.  It didn't leave me with the magical feeling I was expecting.  Because of this, I could only give the book 3 stars.  However, a lot of people really enjoyed this book, so it may just be me!﻿
Posted by Sunnysmileqt at 4:40 PM