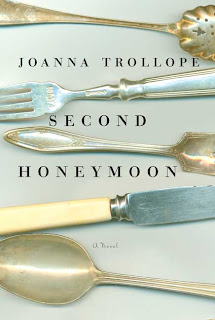 "Ben is, at last, leaving home. At twenty-two, he's the youngest of the family. His mother Edie, an actor, is distraught. His father Russell, a theatrical agent, is rather hoping to get his wife back, after decades of family life. His brother, Matthew, is wrestling with a relationship in which he achieves and earns less than his girlfriend. His sister Rosa is wrestling with debt, and the end of a turbulent love affair." Meet the Boyd family and the empty nest, twenty-first-century style (goodreads.com).

This was a wonderfully written novel, filled with well thought out prose and insight.  I flew through the pages of this book, taking in the Boyd family, immersing myself in their lives, and traveling with them on this journey.  It was an extremely thoughtful and incredible ride.

Edie is a mom of three grown children.  Her youngest, Ben has just left home to share a flat with his girlfriend and her mother.  Edie is suffering greatly from "empty nest" syndrome much to the distress of her husband.  Russell, her husband, would like things to return to how they were at the beginning of their relationship when he had Edie all to himself.  I, obviously, have never had to deal with the empty nest.  However, I know how my mom struggled with it when both my brother and I moved out.  It took her months to be able to readjust to it just being her and dad again, and even now, five years later, she still cooks way too much food for two people!

Second Honeymoon is very much character driven and this is where Trollope excels.  Each character is presented with a distinct, but likeable personality.  Even the cat, Arsie, has a terrific personality and I loved the way that Trollope intertwined him throughout the story.  Each characters story is different, and each is struggling with their own problems and issues.  However, Trollope brings all these characters together and at the end all of their stories come together in a beautifully written conclusion.

This is the first book I have read by Joanna Trollope but she has quite a back list that I will be checking out in the future.  I enjoy books that really hit me in the core, and this was definitely one of them.

Posted by Sunnysmileqt at 2:00 PM