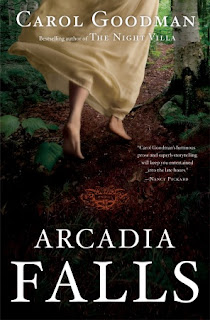 In debt after her husband's unexpected death, Meg Rosenthal secures a job as a teacher at an upstate New York boarding school. Leaving suburban Long Island, Meg and her teenage daughter, Sally, embark on a new life in Arcadia Falls, a beautiful but isolated small town and the inspiration for a number of magically eerie fairy tales. With a hurtful rift growing between her and her daughter, Meg is hopeful that the change of scene will provide them with a fresh start. But it soon becomes clear to Meg that this isolated community hides deeply rooted and deadly secrets. And after a mysterious death, Arcadia Falls begins to reveal a disturbing dark side (Cover Blurb).

I borrowed this audio strictly for the cover.  I thought it was beautiful and gothic and really grabbed my attention.  I'm glad I went with the impulse, and thought this book was really spectacular.

Arcadia is a small private art school that was started in the early 1900s by two women, Vera Beecher and Lily Eberhardt.  The two women were deeply devoted to each other, but each of their lives were shrouded and secrets and betrayal, especially Lilly Eberhardt.  In the present day, Meg Rosenthal comes to Arcadia after the death of her husband, which left her penniless and desperate.  After being offered a job to teach English, especially the history of fairy tales, Meg moves with her daughter Sally into the cottage of Vera Beecher and Lily Eberhardt and it is here where the mystery begins.

Soon after Meg's arrival, one of the students at Arcadia is found dead in the ravine, eerily mirroring the death of Lily Eberhardt so many years ago.  Troubled by the death, Meg begins to delve into the lives of Lily and Vera, finally finding the journal of Lily Eberhardt which has remained hidden for many years.  It is at this point that the novel begins to twist and turn, releasing secret after secret, keeping the reader on their toes.

Intertwined throughout the story, is the fairy tale of The Changling Girl originally written by Lily.  The story mirrors Lily's own journey and it's interesting to see how it fits in with her life.  One of my favorite aspects of this story was the mix between the past and present day.  Along with the changling story, we also were able to experience Lily's journal and travel with her through her struggles.  I loved the descriptions of her life and how everything happened.  There were a few times where my mouth just fell open as I pieced everything together.

I'm looking forward to reading more of Carol Goodman and hope that ther other books are half as good as Arcadia Falls!

Posted by Sunnysmileqt at 10:02 PM