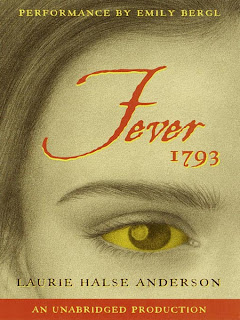 
August 1793. Fourteen-year-old Mattie Cook is ambitious, adventurous, and sick to death of listening to her mother. Mattie has plans of her own. She wants to turn the Cook Coffeehouse into the finest business in Philadelphia, the capital of the new United States.
But the waterfront is abuzz with reports of disease. “Fever” spreads from the docks and creeps toward Mattie’s home, threatening everything she holds dear.

As the cemeteries fill with fever victims, fear turns to panic, and thousands flee the city. Then tragedy strikes the coffeehouse, and Mattie is trapped in a living nightmare. Suddenly, her struggle to build a better life must give way to something even more important – the fight to stay alive (madwomenintheforest.com).

This is the third book I've read or listened to by Laurie Halse Anderson and so far my least favorite.  Unlike the other two books, I found Fever 1793 to be very slow moving and extremely hard to get into.

Fever 1793 is told through the voice of Matilda, a young girl living in Philadelphia during the yellow fever outbreak of 1793.  Halse Anderson chose to tell this story in first person using the voice of young Mattie.  Because of this, I found it hard to connect with the story because I couldn't connect with Mattie.  Also, I often felt the book shifted from modern to historical voice, most likely not on purpose, but the shift was there.

One thing I will give Fever 1793 was that it was extremely historically accurate.  One can definitely tell that Laurie Halse Anderson thoroughly researched the epidemic and she was able to truly capture the feel of fear experienced during that time of crisis.

Another issue I had with this audio was the narrator.  I just didn't like her voice.  I felt as though it made the story drag.  It was a tough subject and I think a different voice would have made the story less of a downer.

Even thought I didn't like my first take of Laurie's historical fiction writing, I'm still going to give Chains (which I requested at the library) a try.

Posted by Sunnysmileqt at 11:14 PM