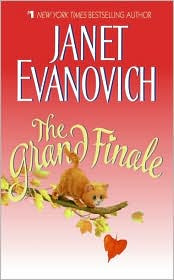 Berry Knudson had a talent for disaster, but when she climbed a tree to rescue a kitten, she wasn't prepared for the scrumptious hunk undressing in a nearby window, or her dive downward that smashed Jake Sawyer's pizza and won his heart! But was there room in her chaotic schedule for a risk-taking inventor with dreams? She took classes, delivered pizzas, and cared for three eccentric old ladies she rescued from the train station. But Jake thrived on a challenge, and he could be very inventive. Could he teach her there was time to make butterscotch pudding and let herself be loved (Cover Blurb)?

I was looking for a quick, fast read last night to pass the time until Michael got home from work. I've always like Janet Evanovich and I've read a few of the Stephanie Plum books before. The Grand Finale was written way before the Plum novels became so popular, and you can definitely tell.

Originally written as a Harlequin type book, the story moves fast and there is not a huge amount of plot development. In fact, the development of the story was TOO fast. That is why I only rated the book two and a half out of five. It was almost far fetched and I found myself rolling my eyes quite a bit.

There are good things about this book. The three old ladies that Berry rescues from the train station are a hoot. The had me laughing to myself quite a few times, and reminded me of some of the older ladies I've worked with in the past. Berry's love interest, Jake, is a sweetheart of a guy, who would do anything for the woman he loves. I really liked him, I just didn't like his over the top I fell in love with you when you fell out of my tree bit.

All in all, an ok read, but nothing to write home about.

Posted by Sunnysmileqt at 2:09 AM