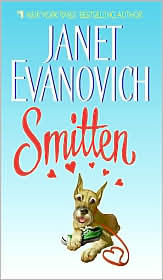 Single mom Lizabeth Kane isn't exactly construction material—she's never picked up a hammer in her life. But she desperately needs the job that builder Matt Hallahan is offering. And even though he knows better, Matt can't refuse her irresistible smile.

Matt Hallahan isn't exactly relationship material—he has always been too busy working on other people's houses to make a home of his own. And even though she knows better, Lizabeth can't stop thinking about the rugged carpenter.

Is the relationship Matt and Lizabeth are building solid—or more like a house of cards?

It's been over a week since I finished this book, so I have to say, my minds a little fuzzy when it comes to the details. I do know this. I liked it much better than The Grand Finale. I felt the story developed at a much better pace and it didn't feel nearly as rushed. Plus, the heroine, Lizabeth was much more normal than Berry (what the heck kind of name is that anyway?).

I also really liked the hero, Matt. He was really down to earth, and he really did love Lizabeth. Plus, I absolutely adored how he tried to protect her from the neighborhood flasher. One of my favorite scenes in the whole book involves Matt in hot pursuit of the flasher. Let's just say it involves minimal clothing and lots and lots of the neighbors.

I would definitely give this Evanovich try if you are looking for something light to read. While these books aren't the Stephanie Plum series, they are still cute and unique in their own right.

I was going to try and read all of Janet Evanovich's Loveswept books in March, but after two, decided a needed a bit of a break. Plus, my reading time has been severely hampered by the new job I took with the new company. Once I'm home at night, I barely have enough energy to get dinner done, clean up a bit, and take a shower. I've been in bed most nights by eight o clock. Hence the lack of posts, and the even bigger lack of reviews lately.

I think once I'm used to everything I'll be back on the reading mojo. Or at least I hope so. Learning new systems, and my work almost tripling has just been running me ragged!

Posted by Sunnysmileqt at 1:13 AM

I liked it too! So far I've really liked all her Loveswept books.