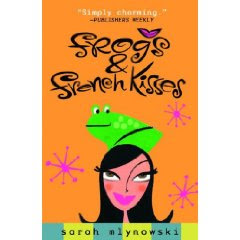 Title: Frogs and French Kisses
Author: Sarah Mlynowski
Pages: 277
Rating: 4.5/5
This frothy sequel to Bras & Broomsticks (2005) is just as sweet and funny as its predecessor. Rachel is still jealous that her mom and little sister, Miri, are witches, while she remains annoyingly unable to levitate as much as a teacup. But when her divorced mom begins whipping up dating spells and using magic to enhance her cleavage, and Miri exhausts herself by zapping oil spills instead of finishing her homework, Rachel suddenly finds herself in the strange position of cautioning her family against their magical excesses. Complications ensue as Rachel tries to bring her normally levelheaded family members under control, while dealing with the results of a love spell gone wrong and a fast-approaching prom. Tempered with the message that nothing worth having comes easily, Mlynowski's sassy text surpasses a chick-lit label by being wonderfully fast-paced and clever. A surprise ending will have fans eagerly looking forward to Rachel's next adventure (Amazon.com)

I started this book the same night I finished Bras and Broomsticks, and read it just as quickly. Frogs and French Kisses continues the story of Miri and Rachel, two normal Manhattan sisters (ok so one's a witch, but I'm sure that's common). Rachel, still in love with the hottest boy in school, has Miri perform a love spell and accidentally causes her crushes older brother to fall in love with her. So now she's a freshman, with an uber cool senior boyfriend, who just asked her to prom. However, Miri, trying to save a field full of cows from being slaughtered, magically sends all the cows to the high school gym - much laughter ensues.

I can't tell you how much I love this series. I don't think I've laughed so hard while reading a book in a long long time. At one point, Miri and Rachel are flying around town on a tricycle (the broom was missing in action...lol) and Rachel is describing herself in relationship to ET when he flew on the handlebars of a bike. The picture in my head was priceless. I'm really glad I read that while I was at home and alone instead of at work in the middle of the office.

This year so far has obviously been the year of the young adult book for me. Young adult titles have come a far way from when I was a teen looking for something to read. There are so many different avenues available to today's younger generation then when I was 12. At that age I was so bored with the choices I started reading VC Andrews (obviously my mother wasn't a reader and was not aware of my book choices...lol). Now, I feel that when I have children, there will be such a wider range of books for them to choose from. And due to the fact that I have a book buying disease, they probably won't have to even buy any :)

Posted by Sunnysmileqt at 2:07 AM

I love when I can read a series back to back like this!

I'm looking forward to checking this series out!
And I know what you mean about young adult books. There are so many good ones lately! It wasn't this way when I was an actual 'young adult' for sure! I told my husband that I think I've read more of these books in the past 6 months than I ever did when I was younger!!
Oh, and I read allll the VC Andrews books too! haha...

I thougth it was just me on a J/YA kick this year. I think I did VC Andrews around that time, and at 13 went on to Stephen King. My mom wasn't a reader, either. ;) This sounds like a great series. I think I'll have to try it!