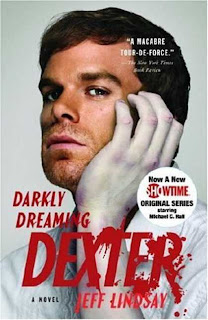 Meet Dexter Morgan, a polite wolf in sheep’s clothing. He’s handsome and charming, but something in his past has made him abide by a different set of rules. He’s a serial killer whose one golden rule makes him immensely likeable: he only kills bad people. And his job as a blood splatter expert for the Miami police department puts him in the perfect position to identify his victims. But when a series of brutal murders bearing a striking similarity to his own style start turning up, Dexter is caught between being flattered and being frightened–of himself or some other fiend (Cover Blurb).

When the television show Dexter first came out in 2007, hubby and I watched the first couple of episodes together.  I somehow managed to quickly lose interest, while he has continued to watch through the four seasons.  I did however, buy the first few books, and absolutely was going to read them right there and then.  Now four years later, I can say I read the first one!
Needless to say, Darkly Dreaming Dexter is totally different than almost all other books that I have read.  A mix between a dark comedy and a slasher horror film, Dexter leaves the reader with a lot of confused emotions.  On one hand, I feel a bit sorry for our vigilante serial killer.  On the other hand, I'm extremely disturbed by his whole story.  After reading this book, I almost want to go back and try re-watching the first season.  The book, of course, has opened up a whole series of questions for me now that I didn't realize even existed when I watched the show.

Despite the subject matter of the book, I really enjoyed Lindsay's writing style.  He took a subject that was extremely dark and created something extremely fresh and rather enjoyable.  I definitely had a hard time putting this book down and finished it in two days.  The character of Dexter is entertaining, and it's definitely interesting to see the different places that his mind takes him.  I like really knowing the inter workings of a main character.  However, I wouldn't want to read these books one right after the other either.  The subject matter is still quite heavy and can be thoroughly chilling at times.

There are five books total, so far, in the Dexter series.  I'd like to continue reading them, but I'll need to space them out over time.  I own the next two in the series: Dearly Devoted Dexter and Dexter in the Dark and hope to get to them sometime later this year.

This book counted towards the 1st in a Series Challenge and the Mystery and Suspense Challenge of 2011.

Posted by Sunnysmileqt at 2:45 AM