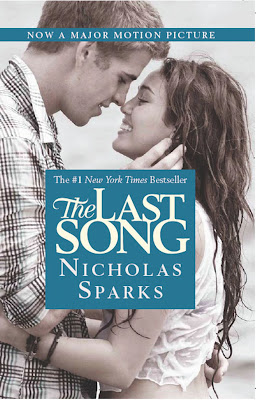 Seventeen year-old Veronica “Ronnie” Miller’s life was turned upside-down when her parents divorced and her father moved from New York City to Wilmington, North Carolina. Three years later, she remains angry and alienated from her parents, especially her father… until her mother decides it would be in everyone’s best interest if she spent the summer in Wilmington with him. Ronnie’s father, a former concert pianist and teacher, is living a quiet life in the beach town, immersed in creating a work of art that will become the centerpiece of a local church. The tale that unfolds is an unforgettable story about love in its myriad forms – first love, the love between parents and children – that demonstrates, as only a Nicholas Sparks novel can, the many ways that deeply felt relationships can break our hearts… and heal them (nicholassparks.com)

I've been watching the previews for this movie for some time now, and I'll be honest, I wanted to see it only for the fact that I thought the male lead was absolutely adorable. Wednesday night I went to the local Red Box and had the movie in my hot little hands. Since that night, I've watched the movie three times and completely devoured the book. This story really touched me...it may just be the pregnancy hormones, but I truly cannot stop thinking about this story.

The Last Song tells the story of Ronnie, a young seventeen year old, that is struggling to find her place in the world. Forced to spend the summer with her father, whom she hasn't spoken with in three years, Ronnie is angry and uncomfortable in the new environment. However, things begin to change when Ronnie meets Will, a good athlete from a rich family that soons finds himself falling hard for Ronnie.

The book was told in four parts. We hear the story through Ronnie, Will, Ronnie's father Steve, and Marcus - the bad guy of the story. This helps keep the book moving at a quick pace and had me turning pages as quickly as possible. I read the book in practically one sitting, and it is probably one of my favorite books by Sparks. I do recommend reading (and watching the movie) with a big box of tissue because this is definitely a tear jerker.

As with most books, I developed quite the literary crush on Will which was only reinforced when I watched the movie. Her is probably one of the sweetest, kind, and caring young men I have read about in a long time.

So my recommendation is to read the book then see the movie. Don't let the fact that Miley Cyrus plays Ronnie turn you away. She actually does a pretty good job and I never once found her to be annoying :)

Here's the preview for you:

Posted by Sunnysmileqt at 9:02 PM