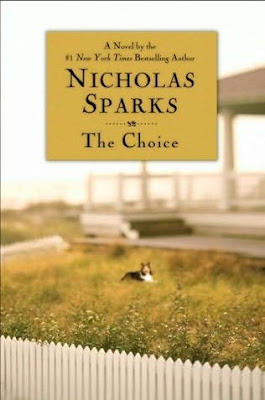 Travis Parker has everything a man could want: a good job, loyal friends, even a waterfront home in small-town North Carolina. In full pursuit of the good life -- boating, swimming, and regular barbecues with his good-natured buddies -- he holds the vague conviction that a serious relationship with a woman would only cramp his style. That is, until Gabby Holland moves in next door. Despite his attempts to be neighborly, the appealing redhead seems to have a chip on her shoulder about him...and the presence of her longtime boyfriend doesn't help. Despite himself, Travis can't stop trying to ingratiate himself with his new neighbor, and his persistent efforts lead them both to the doorstep of a journey that neither could have foreseen. Spanning the eventful years of young love, marriage and family, The Choice ultimately confronts us with the most heartwrenching question of all: how far would you go to keep the hope of love alive (nicholassparks.com)?

I'm obviously on a Nicholas Sparks kick this weekend. I started this one this morning and finished it around mid afternoon, in between making lunch and cleaning the whole house.

I really enjoyed The Choice. The main characters Travis and Gabby are easy people to like and I found myself rooting for them to fall in love and make the right decisions. One of the best parts of this book is the direction that Sparks takes with it. While you are thinking one thing is happening, it so happens that something completely different is going on. It was a real jaw dropper and at that point I couldn't turn the pages fast enough.

One of the greatest things about Sparks books are the deep, intimate and romantic connections between the main characters. Sparks manages to write books that have such a strong love story in the central, that the reader can't help but feel the same emotions as the characters involved. I guess in a way, you could say his books are a bit "cheesy" but its the kind of "cheesy" that I often find impossible to put down.

Being married, I really could understand the struggles that Travis and Gabby faced. It really helped make the story even more real, and again I found myself closing the book with tears in my eyes. I think Nicholas Sparks's wife is probably one of the luckiest woman on the planet, especially if he is anything like his characters.

I have a few more Sparks books from his back list that I've yet to read. Since they seem to be holding my interest right now I might just give them a try.

Posted by Sunnysmileqt at 1:19 AM