Review: Harry Potter and the Prisoner of Azkaban 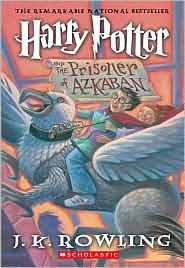 For twelve long years, the dread fortress of Azkaban held an infamous prisoner named Sirius Black. Convicted of killing thirteen people with a single curse, he was said to be the heir apparent to the Dark Lord, Voldemort.

Now he has escaped, leaving only two clues as to where he might be headed: Harry Potter's defeat of You-Know-Who was Black's downfall as well. And the Azkaban guards heard Black muttering in his sleep, "He's at Hogwarts...he's at Hogwarts."

Harry Potter isn't safe, not even within the walls of his magical school, surrounded by his friends. Because on top of it all, there may well be a traitor in their midst (Cover Blurb).

I really could kick myself for waiting as long as I did to start this series. Now that I'm getting deeper and deeper in, they are all I can think about. If it hadn't been for everything going on at work this week, I would have finished this one way before today.

So far, Book Three, is my favorite by far. There's quite a bit of mystery and deception within its pages, and the story is really starting to develop. We're learning more and more about what went on between Harry's parents and Voldemort and how different people fit into the story. I love the fact that we learn a little bit more about Snape in this book. It helps explain some about how he feels about Harry.

I've always been a big Harry supporter when I watched the movies, but now that I'm reading the books I think I have a little crush on Ron. He's just so darn cute! I'm going to start Book Four this weekend and Michael is out of town most of the day tomorrow so I think I might watch a few of the movies. I'm rather looking forward to it!

Posted by Sunnysmileqt at 12:32 AM

Emily if you have the ABC Family Channel, they are showing movies 1-3 today! I know how I'm spending my Saturday!! :)
I loooove this book. And movie. And I agree. I have a total crush on Ron! He's my favorite!!

Book four was my favorite in the series, I hope you enjoy it!

I just love, love, love these books. Really. It's so nice to see someone else discover how absolutely fantastic they are!