Review: Harry Potter and the Chamber of Secrets 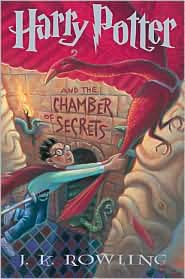 Title: Harry Potter and the Chamber of Secrets
Author: J.K. Rowling
Pages: 341
Rating: 4.5/5
Ever since Harry Potter had come home for the summer, the Dursleys had been so mean and hideous that all Harry wanted was to get back to the Hogwarts School for Witchraft and Wizardy. But just as he's packing his bags, Harry receives a warning from a strange impish creature who says that if Harry returns to Hogwarts, disaster will strike.
And strike it does. For in Harry's second year at Hogwarts, fresh torments and horrors arise, including an outrageously stuck-up new professor and a spirit who haunts the girls' bathroom. But then the real trouble begins - someone is turning Hogwarts students to stone. Could it be Draco Malfoy, a more poisonous rival than ever? Could it possibly be Hagrid, whose mysterious past is finally told? Or could it be the one everyone at Hogwarts most suspects...Harry Potter himself (Cover Blurb)?

My first read of March was the second in the Harry Potter series. I really enjoyed this book of the series, and it read super fast (I finished it up this morning before work, after just starting it yesterday afternoon). I'm so glad I started reading these books because now things that were confusing me in the movies make sense. Plus, they are just genuinely really great books.

The Chamber of Secrets is one of my favorite movies, mostly because I think Dobby is so darn cute. However, its also been the most confusing because of the whole Tom Riddle/Lord Voldermorte thing. I could never figure it out - how it all worked, how they were connected, and the purpose of the diary. Now, its like an alarm went off - I get it! And its a really cool twist that brings the whole story together so neatly. And, the end left me a just a wee bit teary eyed. I was just so proud of Harry!

Also, with this book of the series, I'm beginning to really really dislike the Malfoys. First off, I don't like people who buy friends. Secondly, they are so mean - especially to Dobby - I was so angry at the way Old Man Malfoy kicked Dobby down the hallway, I could have spit nails. And then to treat the Weasly's with such contempt - dishonorable! I really hope they get their comeuppance in the later books.

I'm hoping to read number three before the end of the month - I really would love to be caught up when the new movie opens.

Posted by Sunnysmileqt at 11:36 PM

I know what you mean about being confused about a few things in the movies before reading the books! There are a lot more details in the books that help it all come together! Glad you're enjoying the series. Book 3 is one of my favorites (love the movie too!) so hopefully you'll love it too!