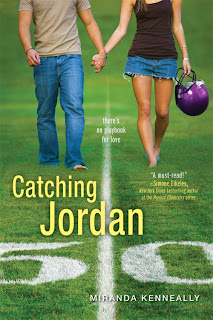 What girl doesn't want to be surrounded by gorgeous jocks day in and day out? Jordan Woods isn't just surrounded by hot guys, though- she leads them as the captain and quarterback of her high school football team. They all see her as one of the guys and that's just fine. As long as she gets her athletic scholarship to a powerhouse university.

But everything she's ever worked for is threatened when Ty Green moves to her school. Not only is he an amazing QB, but he's also amazingly hot. And for the first time, Jordan's feeling vulnerable. Can she keep her head in the game while her heart's on the line (cover blurb)?

I always like to start the New Year off with either a book I've been wanting to read for a long time, or one that I've been hearing a lot of chatter about in the blogosphere.  In the past few months, I have read tons and tons of positive reviews for Catching Jordan, but still I was hesitant.  One of my favorite books (and series) is Dairy Queen by Catherine Gilbert Murdock.  I was nervous that Catching Jordan would fall short, and I would spend the entire time comparing Jordan to DJ Schwenk.  Once I started reading I quickly learned two things:  Catching Jordan was addictive in its own way, and two - Jordan Woods could definitely hold her own (DJ who???).

I started this book last night, as the ball was dropping, and finished it early this afternoon.  I only put it down to eat, go to the bathroom, and play with Anthony for a bit.  Sometimes I'm so thankful that he's a great napper...lol!!

So what made this book so good?  Well for one, the characters were fabulous.  Jordan is quarterback and captain of her football team.  She's a girl swimming in a male world, and that's perfectly fine with her.  She shuts down a lot of her feelings to be a leader, and doesn't want to show weakness among her teammates.  Kenneally developed Jordan in such a way, I'm pretty sure for a few short hours I was a high school quarterback, surrounded by a team that loved and respected me.  I agonized over every misstep and decision.  I felt the hurt and the pain.  I felt the joy and the happiness.  I wish there were always characters like Jordan around.  I'd never read a bad book.

And let's not forget about Jordan's teammates and love interests.  Of course, my favorite, was Sam Henry.  He has to be one of my new favorite male leads today in YA literature.  He was so darn cute and sweet...and also very, very frustrating.  There were times that I really wished I could crawl in among the pages and smack him right up alongside his head.  Along with Sam, we had Ty, who was just smokin' hot...lol.  I loved how he felt about Jordan and how their relationship grew and changed.

Over all, this was an amazing read, and a great addition to current YA Contemporary Lit.  I look forward to reading more from this author!

Posted by Sunnysmileqt at 11:00 PM