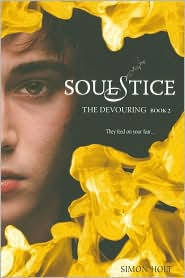 It's been six months since Reggie first discovered and fought against the Vours, malicious and demonic beings that inhabit human bodies on the eve of the Winter Solstice.

The Vours still haunt Reggie, but only in her dreams-until one night, when an unexpected visitor turns her nightmares into reality.

The battle against evil continues in Soulstice, the second book in the thrilling The Devouring series, which School Library Journal called, "Comparable to books by R. L. Stine and Stephen King....A must-have for horror fans." (Cover Blurb).

THIS REVIEW CONTAINS SPOILERS TO BOOK ONE - THE DEVOURING

Soulstice begins six months after Reggie's quiet hometown of Cutter's Edge was attacked by the evil, demonic Vours. Reggie, Aaron, and her brother Henry are slowly beginning to readjust to normal every day life and are letting the nightmares go. However, things are complicated by a tough detective sent to find Quinn Waters, the town golden boy, whom Reggie and Aaron drowned in the lake to save Henry the previous winter.

Tension continues to grow when Reggie freaks out during English class due to a horrific vision brought on by the Vours. It is at this point that Reggie realizes that they have still not escaped the evils of the Vours. Further complicating the situation, is Aaron's arrest by the tough city detective --- a Vour sent to crush the enemy.

I'm having a tough time judging this book. On one hand, the writing was really good and it did creep me out. I had to dig out my Ipod last night to fall asleep because the house was making creepy noises. However, I felt that the novel was lacking something. I had the same feeling after finishing The Devouring. Both books have tons and tons of potential, but its just like they're sitting right on the edge and not taking the leap. It's almost nerve wracking to read sometimes. Another thing that annoys me about these books is that they end in cliff hangers. Which is great if you have the next book right on hand to start, but book three doesn't come out until Fall of 2010. That's a year away!!

So all in all, Soulstice is great for the creep factor. It just left me wanting more...and not in a great way.

Posted by Sunnysmileqt at 11:42 PM